24-year-old Max White is an alt-pop singer/songwriter from The Isle of Wight, currently based in Brighton. From age 10 Max lived in Central American country ‘Panama’, where dance music reigns king over all else. “Seeing how happy dance music makes people just made me want to make it myself". Max later moved back to the UK at age 15 and became heavily inspired by singer/songwriters like Lewis Watson, Passenger, and Bon Iver.
This range of influences are what make Max White’s music stand out from the rest. Intimate, Emotional, Uplifting; Pop.

The success with debut release "Sugar" led to a successful European tour of packed-out shows. "Performing to packed-out rooms was an incredible experience, some were one-in-one-out; it was surreal"

After a successful first release, Max joined forces with well known dance music duo Dada Life on their comeback album ‘Our Nation’. The song ‘The World Can Burn’ went on to be the most successful track on the album, when the remix accrued over 3.5 Million streams, bringing the total to over 4 Million.

Max followed with his second solo release ‘I Don’t Need You’ which has received over 62,000 streams across all platforms in its first year.

“Writing ‘I Dont Need You’ changed my music forever. Everyone has that song that helps direct their career in a new direction, and ‘Dont Need You’ was THAT song for me”.

The track also caught the attention of one of the UK’s biggest artists- Rag’n’Bone Man. The two later performed together, covering Paul Simon at Rag’n’Bone Man’s home studio.

2021 will see Max White release his debut ep ‘IMAGINE’, Support Rag’n’Bone Man at the Jazz Cafe, Kenwood House, The South of England Showground (Alongside RAYE), and his entire UK & Ireland Tour. Fresh off tour with Rag’n’Bone Man, Max will be touring the UK on his first ever UK Headline Tour. 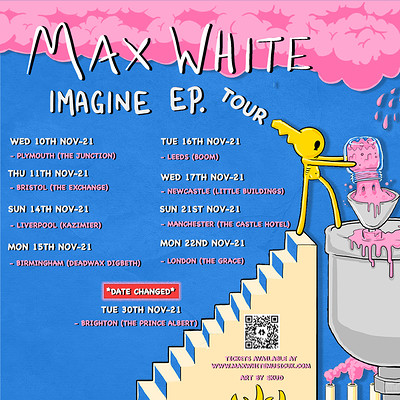