"Dear Fans. We wish we’d have come up with a snappy fandom name, but we didn’t, so we’ll just call you friends. Dear Friends. It’s with heavy hearts and after much soul-searching and deliberation, we must announce that after 15 years, we, the international cult rock band Johnny Foreigner, are still a band.
And what a 15 years it was. What a waste. A consistent failure to convert critical acclaim into anything approaching comfortable sales. We lost time, friends, jobs, all to appease a steadily shrinking demographic because we felt it was the -right- thing to do. Real punx don’t get to choose.

We have tried to quit, believe us. We have families, responsibilities, commitments to a world that absolutely does not care that we spent the majority of our adult lives standing on the barriers, spitting into microphones with little effect. Touring is for young folks. Album cycles are for old folks. Both are pretty unappealing prospects rn, but they were always side quests; things that could happen -because- we’re 4 friends making noisy pop songs. We’ve talked at length about this and finally arrived at the unanimous unfortunate conclusion that now is absolutely not the time to stop being 4 friends making noisy pop songs"

Much beloved Birmingham Indie four-piece come to play their first Bristol show in over 10 years. Expect new songs, old songs and all the good songs. 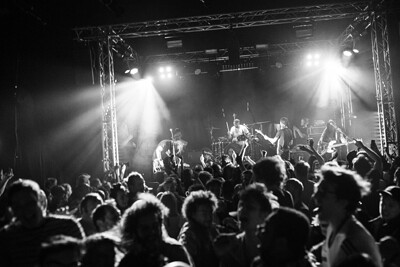