Windshake at Exchange
Plus supports TBA

Formed in Wales, WINDSHAKE have been playing live and recording music for the best part of four years. Since 2019 the band has been based in Bristol where they have recorded their debut album with a line-up consisting of Sam Elliott on vocals and guitar, Kilian Lee on guitar and Oliver Thomas on drums and percussion. They have since been joined by Anna Bennett on keyboards and JoJo Oakes-Monger on bass for live work and future recordings.

So far, the band has released three of four singles in anticipation of the impending debut album, Waking Moment which is due out at the end of 2021.

'Orange Raincoat' and 'Sharing Machine' (released in January and April, respectively) showcase the folkier aspect of the album while 'Don't Rush (The Phone Will Keep Ringing)' develops from these roots. 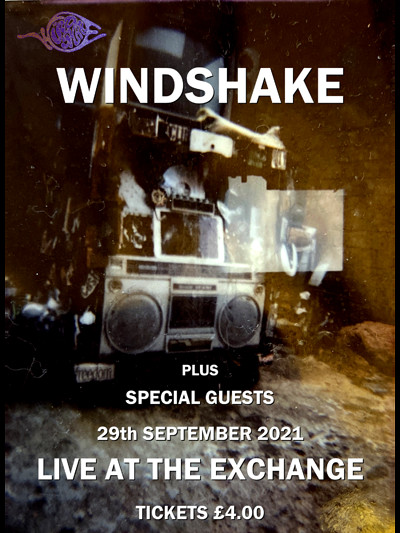