Legendary Afrobeat vocal and keys player Dele Sosimi (from Fela’s original ‘Egypt 80’ Supergroup) teams up with local afrobeat pioneers No Go Stop to bring you a night of 4 hours continuous Fela Kuti tunes. And if at the end of that you still want more Bristols Area Boys DJs will keep the party going with the best of Lagos dance tunes and Fela remixes. Get your work out on and see you there!

Dele Sosimi, the UK's multiple award-winning Afrobeat Ambassador has been consistently flying the Afrobeat flag in the UK since 1995, leading to roles as Musical Director and Afrobeat Music Consultant for the US award winning acclaimed musical FELA! at the National Theatre, South Bank in London (2010-2011).

His “Afrobeat Vibration”, now in its fifth year, is London’s top underground event. Dele’s Afrobeat pedigree is impeccable. He was keys player and a musical director in Fela Kuti’s Egypt 80 and subsequently with Fela’s son Co founding & leading Femi Kuti’s Positive Force. Dele’s pulsating live shows demonstrate his vision of Afrobeat - one that is faithful to the original blueprint, but also clearly bears Dele’s own DNA, expanding the horizons of the genre.

He is one of the most active musicians on the Afrobeat scene, with his involvement with other artists and his work on his own critically acclaimed compositions spawning several remixes.

The mighty 12-piece No Go Stop are much more than a tribute to past glories, they are a living, breathing evocation of the life-force that is Afrobeat. Boasting an impressive repertoire of self-penned, new material, they have recently released their debut record "Agbara Orin”. Driving percussion, brass encrusted rhythms and epic instrumental solos set the pace while echoes of Old Soul from Marie Lister’s Vocals, catch the timeless quality of that ancestral funk sound. No Go Stop are truly on a mission to bring something exciting and new whilst staying true to Fela Kuti's musical mission to present the heart of jazz with the soul of Africa and keep you dancing till dawn.

Afro-global-bass DJ duo Area Boys are Ulli Bartsch (aka uliba) and Obaro Evuarherhe (aka O'baro) the purveyors of international beats anywhere between Düsseldorf and Lagos.

Together they discovered their love for african rhythms ranging from Fela Kuti’s afrobeat to Ghanaian High Life, east African Soukous, to more modern “afrobeats”: Kuduro from Angola, Kwaito house from South Africa, and Azonto from West Africa. In between you will find South American sprinkles of Colombian Cumbia, Raggaeton and Jamaican Dancehall. 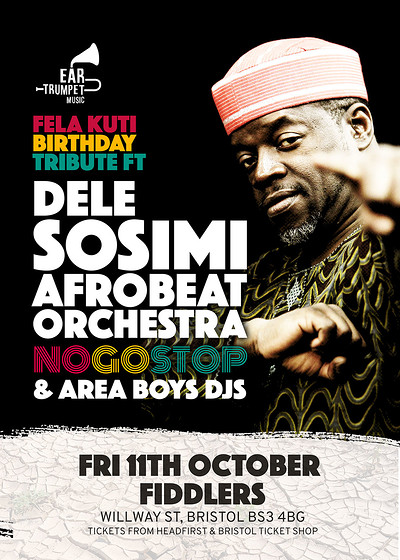