The Bluecats, Restless, The Deltas & The Uproars

— Fiddlers
For fans of Neo-Rockabilly this is a chance to see NO LESS THAN FOUR of the absolute greatest the genre has to offer.
time:19:00
price: Headfirst Tickets

For fans of Neo-Rockabilly this is a chance to see NO LESS THAN FOUR of the absolute greatest the genre has to offer. On Saturday the 25th of January 2020 you can experience three of the original Neo-Rockabilly pioneers who helped push the boundaries and shape the genre in the mid 80s. Newcomers, The Uproars will also enter into the mix to keep the stage cooking all night!

If you are into hard pumping slap bass, lightning fast guitar picking and virtuous drum rhythms, you will not be disappointed!

WARNING: This event will have a high risk of dancing!
THE BANDS:

The Blue Cats
Formed in 1980, this London based quartet shook the Rockabilly scene with the release of their seminal debut record, FIGHT BACK in 1981. Their unique fusion of Rockabilly with New Wave music in the 1980s earned them the label of the original Neo-Rockabilly act. The musical innovations didn't stall at any point during the first decade of the bands career: A year later in 1983 they recorded a highly experimental EP under the new name ‘The G-Men’, and in 1984 they gained huge success and a cult following on the alternative London club circuit as ‘Beltane Fire’. In 1989 they got their international breakthrough invading New York City as ‘Flame of the West’. But it was under their original name, The Blue Cats that they recorded their critically acclaimed album ‘THE TUNNEL’.

After a 15 year hiatus, where the members worked on their individual projects the quartet reunited for a one-off gig in 2008. What should have been a nostalgic reunion proved that the band still had IT! — And that became the basis for the current lineup of Clint Bradley, Stef Edwards, Carlo Edwards and Steve Whitehouse. This lineup recorded another critically acclaimed studio album in 2012, rightfully titled; ‘BEST DAWN YET’. Since then the leaders of the Neo-Rockabilly movement haven't slowed down, rocking stage after stage in packed venues across Europe.

Restless
If you have never experienced Restless live before, do yourself a favour and find their 1989 ‘Live in Tokyo’ album. With several studio and live albums Restless is probably the most successful Neo-Rockabilly band never to have charted. Their first studio album is by fans held as the perfect Neo-Rockabilly album, in terms of song writing, musicianship, lightning charged energy and just the overall attitude of the album. But it is their live act that really makes the music come alive, and that’s as true today as it was in the 80s. The lineup might have shifted a bit over the years, but that was probably exactly what was needed to keep the energy up for so many years.
Restless rocked Klub Foot — the original Mecca of Psychobilly and Neo-Rockabilly in the mid 80s — they have sold thousands of records, and toured the world — and they will surely rock this night in Bristol too! With their tight rhythm section, blistering guitar riffs and thumping slap bass, Restless is as relevant on the Neo-Rockabilly scene today as they were 30 years ago. Dust off your dancing shoes and get ready for one of the best live acts in the history of Neo-Rockabilly!

The Deltas
Like The Blue Cats, the veterans from The Deltas emerged on London’s rockabilly scene in 1980. The original triple attack consisting of Little John’s double bass, “Captain Pat Marvel” Panioty’s guitar and Steve Bongo’s drums has been expanded with the bands former producer, Boz Borer, on saxophone, and John “The Bomb” Buck on drums — freeing up Steve Bongo to concentrate fully on his vocal work. Since the beginning the band has been on a mission to stretch the boundaries of the rockabilly genre.

But unlike the bulk of bands stealing from the popular musical styles of the day, The Deltas found inspiration in the blues, with inspirations like Lightnin’ Hopkins and Sonny Boy Williamson giving their wild and frantic rockabilly a uniquely different twist. Their diverse musical inspirations allows the band to span from dynamic jazzy compositions to all out psychotic Rockabilly madness at its best over the course of a single set. Don’t show up thinking you know what you’ll get from The Deltas, they will pull the unexpected out of their hat when you least expect it and blow you away!

The Uproars
This hard hitting four-piece ensemble from Redditch, has been assaulting the ear drums of rockabilly and music fans every where they play with a potent mix of everything rockin’ between Neo Rockabilly and punk inspired Psychobilly. The band themselves refer to their music as “Wild Rockabilly with a modern twist”, and you only need to experience the first few lines of one of their sets to hear that that’s exactly what they deliver! The four guys from The Uproars deliver as much sex appeal, punk-like energy, and music talent as any band on the current rockabilly scene.

If their upbeat, energetic rockabilly rhythms, bass lines, and blistering guitar licks doesn’t rock your socks off and your greased-up haircut back, then you’re either an extraordinarily hidebound rockabilly purist or highly allergic to having a good time. — For everybody else, this is as good as it gets when it comes to wild and rocking stage performances!

Event photos for The Bluecats, Restless, The Deltas & The Uproars: 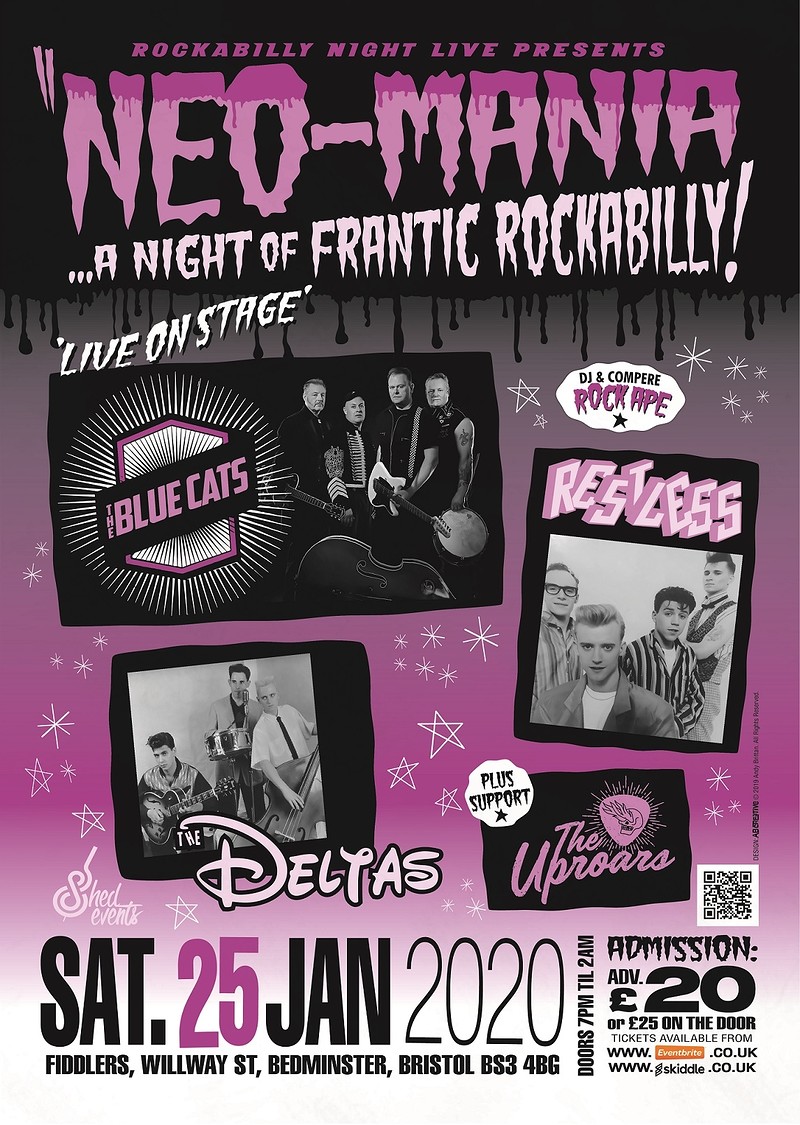 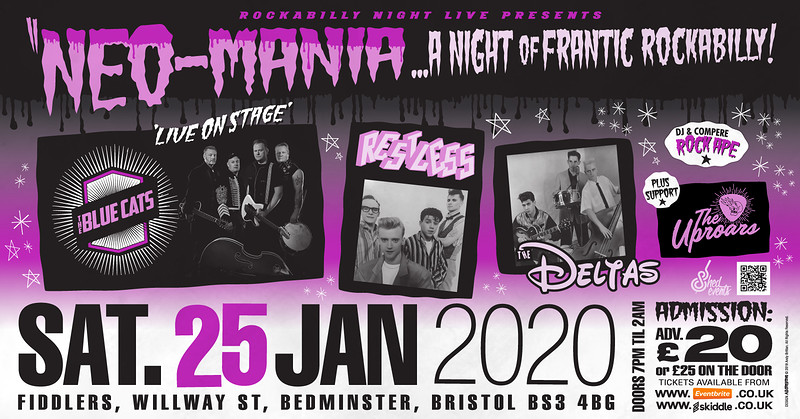 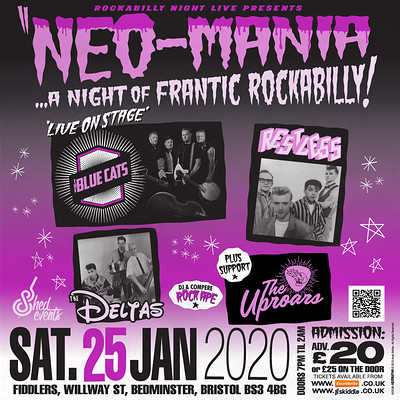