First time for SongSmith at FCC for Friday nights once a month hosting original music in south Bristol.
T.E. Yates: Unassuming, unusual and enigmatic, T.E. Yates is a multi-disciplinary artist of rare and disarming qualities. Most musicians boast of exploding onto their local scene in a glittering blaze of media hype and spontaneous applause. T.E. Yates, however, snuck in through an open window.
His debut EP “Possessed” was released on Debt Records in 2013. His first full LP, entitled “Silver Coins And White Feathers” and produced by Biff Roxby, was released on Debt Records in May 2017.
http://www.teyates.com/
https://www.facebook.com/T.E.Yates.Official
Twitter: @ teyates
Instagram @ teyates_
Wolfgang K: Joe Strummer, Ray Davies, Elvis Costello, Billy Bragg, Jonathan Richman, Paul Weller, Neil Young and Frank Carter - just some of the people he's been compared to, or ripped off...
Former Cormorant Wolfgang K has flown the nest and put together a blistering collection of punk tinged self--penned work with period covers. And very nice it is too...
https://www.reverbnation.com/wolfgangkuchler
soundcloud.com/wolfgang-kuchler
https://www.facebook.com/WolfgangKmusic/
Open Stage: Between the acts we will have up to an hour "open stage" for local acts interested in performing at later dates.. Any genre including MC or hip hop too with the emphasis on original material rather than covers. Contact via pm to SongSmith page or via email at songsmith@jumpingjoint.co.uk if you think you would like to play. SongSmith are trying to find the talent and the audience in BS4 and around south Bristol.
There is no entrance charge however we would be grateful for any donations for the artists and towards the running costs. 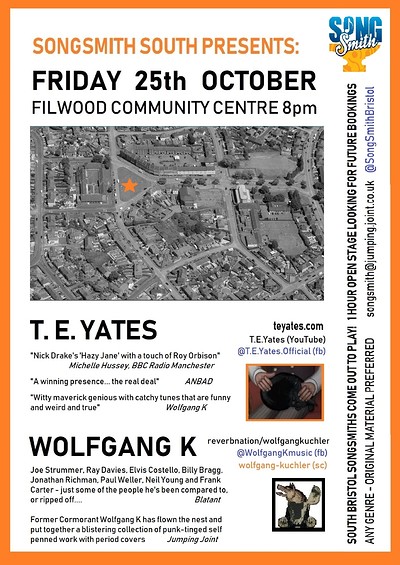