We are really excited to be joined by Emma Warren, journalist, critic and interviewer. Emma has been writing about music since her founder member contribution to Jockey Slut magazine in the mid nineties. She will be reading from her new book and cultural manifesto “Make Some Space: Tuning into Total Refreshment Centre” and hosting an early evening panel discussion 'FIghting For Space' with Kerry Patterson (Dirty Talk/Strange Brew), Jendayi Serwah (Community Activist/Educator & Broadcaster and member of the Malcolm X Centre in the 1980s) and Chiz Williams (Cube Microplex...not to mention countless of things with boundless enthusiasm and energy over many years).

Emma's book tells the story of London venue Total Refreshment Centre which ran under the radar for six years and which became a key location for what became the new London jazz explosion. They provided space before the outside world was interested. Culture was generated. In Bristol, she asks how we can collectively support venues, community centres and clubs in the fightback against closure? And why do we need them anyway? The panel takes a look at Bristol's storied spaces that generated culture in the past and continue to do so now and looks at how physical spaces can help us come alive as a community too?

Praise was wide for Emma's book, which she published DIY and she'll be selling and signing. It's now been included in Mojo's Top Ten books of the year following a great reception.

“A thoughtful, political paen to that precious sense of transformative belonging that club and musical cultures can provide” — The Wire

“A considered and optimistic rebuke to the forces that seek to oppress street-level creativity.” Richard King, Original Rockers

“Make Some Space fulfils its own remit, creating an enduring legacy for the TRC and encouraging other creators to live out their own dream” — The Observer

7-7:30pm - Author talk: Emma Warren talking about 'Make Some Space' and reading from the book. 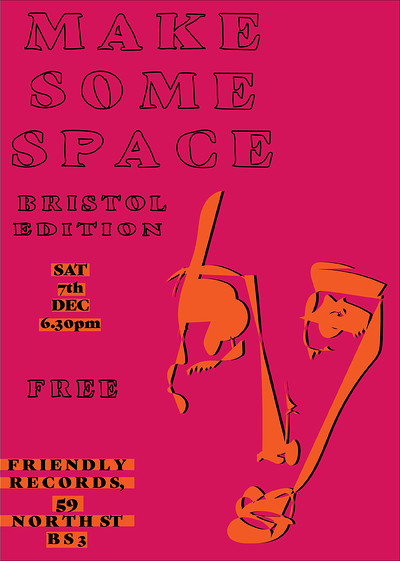