The quintet includes some of the finest younger generation jazz musicians. Two of which are well known to Bristol audiences: Ivo Neame; most especially with Phronesis, but also with Marius Neset, Jim Hart plus his own groups, and James Maddren who has rapidly become the go-to-guy for a who's who of top UK jazz groups. The bonus adddition of Julian Siegel on saxes is a major plus to this already stellar group.

'An exciting band to hear live. ' - John Fordham, The Guardian

Guitarist Ant Law was a scholar at both Edinburgh University and Berklee College of Music (USA) until moving to London in 2008. He then picked up work with artists such as Tim Garland, Mica Paris, Gwilym Simcock, Leon Ware, Asaf Sirkis, accordionist Koby Israelite, vocalists Camille O'Sullivan & Eileen Hunter, and members of Incognito and Level 42.

Law has established himself as a standout new talent with an unorthodox yet original guitar approach as well as one of the UK's noteworthy new composers.

He makes regular trips to New York to study with his heroes Ben Monder, Lage Lund, and significantly Ari Hoenig, with their collective influences audible in his music.

His style has been described as similar to that of the great Pat Metheny with lots of space, utilising interesting melodies and harmonies. 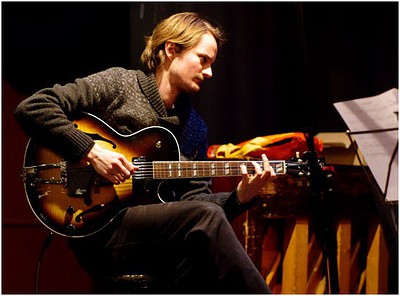