Dave Jones is a classically-trained pianist and organist who developed an interest in jazz, and studied with jazz author Lionel Grigson from the Guildhall School of Music in London. He has since released numerous critically-acclaimed jazz albums with his own ensembles and appeared on albums by other artists, with whom he tours in the UK and Ireland and overseas. He also composes and produces music for TV and Film.

The Dave Jones Quartet line-up is impressive with Ben Waghorn on saxes and flutes (NYJO, Tommy Chase, Slowly Rolling Camera and Keith Tippett, Goldfrapp, Kasabian and Portishead), Ashley John Long on bass (John Law, Brandon Allen, Geoff Eales, Alan Barnes, Scott Hamilton, and London Philharmonic Orchestra), Andy Hague on drums (trumpeter for Portishead, and Be-Bop Club in Bristol regular), and pianist Dave Jones (has performed in the US, India, France, and Ireland, and has TV composition credits including ‘The Big Bang Theory’, the US Open Golf Tournament, ‘Late Night with Seth Meyers’, and ‘Location, Location, Location’, amongst numerous others. This current Quartet now have 3 critically acclaimed releases in the shape of ‘Is That The Time?’ (launched at Pizza Express Jazz Club, Soho, London, in Feb 2020), ‘Answers on a Postcard’ and ‘KeyNotes’.

“… jazz can mean many things to many people. But if you’re after the marrow of the music, look no further.” (5-star review - Jazz Journal, 2019) “…followers of contemporary jazz at its best need look no further” (Jazz Views, 2019) “Jones has assembled a formidable quartet” (London Jazz News, 2017) “The theme writing is, as you might expect from a successful film and TV composer, memorable, and the playing has a muscular, rolling intensity that puts me in mind of McCoy Tyner.” (Jazzwise, 2017) 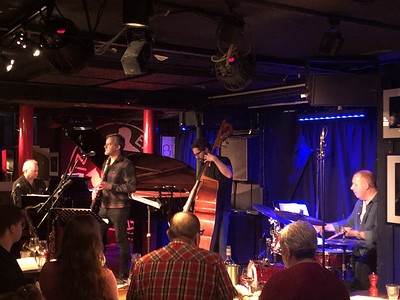