GANG
"Gang at the Windmill, Brixton, now as a four piece, with a younger sister on guitar and singing! A half hour set, one piece of music. But not prog, as they were hinting. They have definite musical ideas, sometimes absurd ones, which become better as they stick to them. The more absurd the better. They have a free way with performance too: they know the absurdity of rock routines and develop a way of being together through them and out the other side into laughter and the scary space of whatever comes after rock-ism. The singing swaps back and forth between one brother drumming at the back and one on guitar at the front -- which means the uncertain mood is shared out as a general problem, socialised -- it's not just ye olde young man angst. Joe on the bass leaps about like a big kid, he is the one with his shirt off and a surplus of energy. They are a band, they need each other's difference and physicality." - Ian Hunt

INEVITABLE DAYDREAM
A band of brave travellers assemble, these seven knights dare to stand against the ancient evil. Hailing from the faraway costal shire Margate, these seasoned warriors powerful as they stand may be humanities last hope. Strapping amplifiers and satchels of pipe-weed on to their steeds they ride to meet the dawn. Wielding a horned solid body axe strung with the hair of sea nymphs, Jack is first of the three chosen knights with skill unmatched throughout Ozma. The second, a merchant of seismic rumbles and analogue dwarven magic, Connor and his 1970 bass-mace are capable of stirring significant tectonic activity. Taking to his throne on horse-mounted drums, John, paladin of rhythm is the third of the chosen. His mallets a blur between crashing cymbals and the booming pulse of tom-tom fury, stoking a fire of grooves with unfathomable power. The chosen make up Inevitable Daydream, together they forge riffs to split mountains and melody to soothe the ailing world-soul against the evils of the earth. 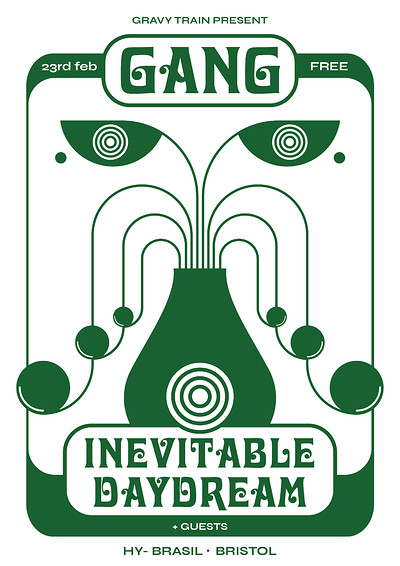