On the 21st of February, we're throwing an AMAZING FEMINIST FUNDRAISING PARTY and we invite people of all gender identities to come and dance the night away, while enjoying themselves in a safe inclusive environment. Let's have the best time!!

The event will feature performances by female, queer and non-binary musicians and artists, a raffle and short speeches by activists.
*Raffle bundle offers are for raffle tickets only: they do not include entry tickets*

The venue is wheelchair accessible.
++ LINE UP ++

~ TOUGHGUY ~
Toughguy are a lively local two piece playing pop-inflected rock, or rock-infected pop, depending on what song it is.

~ DEE2 ~ R&B/GARAGE
You may know Dee2 aka Darcie Doll as co-creator of the multi genre female fronted night - Bad Reputation. Dee2 has been regularly DJing around Bristol at a variety of nights, most notably Queer Prom and Hush. Expect a mix of throwback RnB/Garage!
https://www.facebook.com/Bad-Reputation-Bristol-105158460970366/ 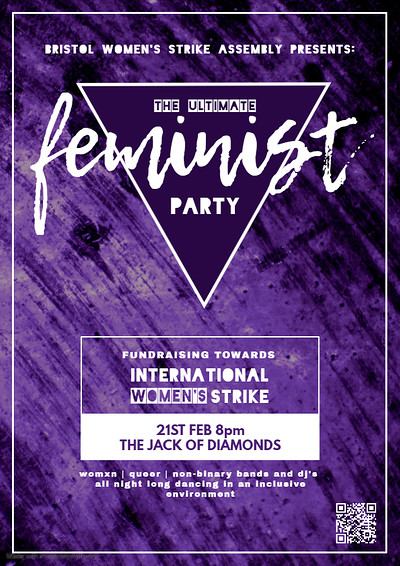