After celebrating its first birthday with Carl_H and Sam Watson at The Crofters Rights, Present Tense is teaming up with London label Ornate Music for a heavyweight session at Old Market in the saucy surroundings of Jack Of Diamonds.

For more than 10 years Ornate Music has built up a distinctive identity around deeper strains of machine soul across the house and techno spectrum. They’ve released music by the likes of Leif, Jayson Wynters, Rai Scott, Dubbyman and so many more besides, with a tacit focus on quality over hype or passing fads. It’s a sound completely in tune with the more immersive end of the Present Tense spectrum, so we jumped at the chance to team up with them and put a line-up together. Alongside Ornate mainstays Jonno & Tommo and Homepark, we’re thrilled to host two very special live sets in Room 1.

Reedale Rise has been on the, err, rise over the past few years with releases on 20:20 Vision, Subwax and Frustrated Funk. The Liverpool-rooted producer also dropped his debut album Luminous Air on KONDI last year, cementing his position as one of the most exciting producers operating in the resurgent electro landscape right now. His live set came of age last year with a staggering run of gigs across Europe, and we’re thrilled to be welcoming him to Bristol.

Zobol has been steadily emerging through a handful of killer appearances on labels like Talahachi and the excellent French imprint Goldmin Music. He’s also one half of Spacial Zone with Entrave, exploring expressive and subtly psychedelic routes through electro, EBM and other such body-poppin’ beatdown business. As part of Bristol’s Eminent crew, he’s also been helping push forward thinking club sounds across the city and beyond, whether DJing or performing his own material live.

Aside from the heavyweight line-up in Room 1, we’re also inviting Delete / Freerotation regulars BMO and MTF for a back to back session in Room 2, as well as Marlon Clark from Albeit Records and Wax Galatique from Dogruff. You can expect all manner of tripped out backroom sounds to contrast with the main room fireworks.

A leap on from the one room sessions we’ve done to date, this is a step up for Present Tense and we couldn’t think of better company for the journey – the only missing piece of the puzzle is you.

See you on the dancefloor x 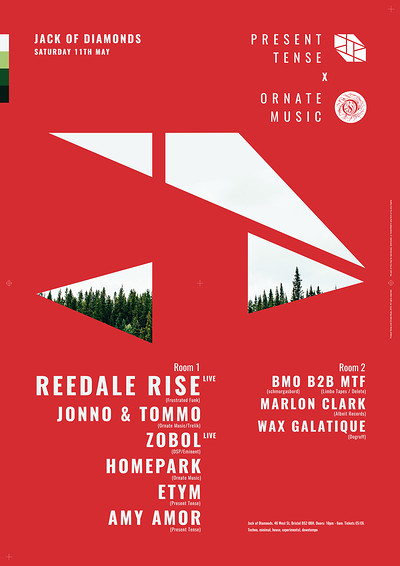