— Jam Jar
Rum Buffalo release their debut album At the end of May and are coming to Bristol to perform their new show.
time:19:30
price: Tickets Below

fornicating with rhythm and melody. Mingling many genres, they blend blues, pop-rock and space punk with filthy synths and epic horn lines to rock the party like no other act. With their Upcoming debut Album, “Bloodmoon”, coming soon, the band are aching to bring their New show to bristol before the records release on 28th May.

Since their formation, their jetpowered live show has stormed the UK live music scene, performing to 10,000 on the Truth stage at Glastonbury as well as Boomtown Fair, Shambala, Wilderness, Buskers Bern and dozens of other festivals. Their unique performances border on the surreal, with three-piece horn section, vaudevillian costume, and fire performance brought together by flamboyant singer, guitarist and front-man, Jake Stevens.

Their powerful sound features a unity of purpose which is impossible to resist, as the band perform Houdini-esque musical contortions in perfect unison.

The 8-piece band have toured the world, with performances in Iceland, Switzerland, France, Turkey and Malta, along with a string of gigs in New York City, which included a show at Manhatten's Rockwood Music Hall.

2018 saw the release of their second independent album ‘100 Years of Binbag Wisdom’ - which featured collaborations with Bristol's finest unsigned instrumentalists - an album of pure talent and emotional realness that has quickly become staple listening for fans worldwide. With recent plays on BBC 6Music, BBC Radio 3 and several local BBC stations, alongside a packed set on the BBC introducing stage at Latitude festival, momentum is building. Currently working on their third release, 2019/20 are set to be exciting years for new music, videos and tours from this DIY powerhouse.
A fusion of glorious laid-back hip-hop grooves, energetic and powerful grunge riffs & a conscious and poetic vocal performance. 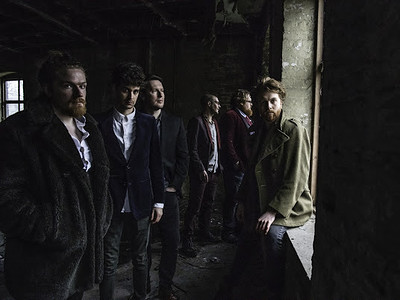