These two performers are prolific on the scene both inside London and across the rest of the UK. Being integral current and past members of bands like Onipa, Maisha, Cykada, Steam Down & plenty more...both of these musicians are also fantastic performers in their own right and we cannot wait to host them for this special evening of music! Read on for full info...

Signed to the prestigious Gearbox Records, his 2020 album "I Am Panda" received wide support from the likes of Gilles Peterson, Clash Music & Jazz FM. Chiminyo, AKA Tim Doyle, is a drummer who uses drum triggers to create an epic sound so big that it's hard to beleive it comes just from one man! Chiminyo plays regularly with both Cykada & Maisha as well as previously collaborating with artists such as Gary Bartz, Nubya Garcia, Shabaka Hutchings & Zara McFarlane.

Chiminyo's sound is truly unique, a euphoric cacophony of drums and melody which truly stands out from the crowd.

Wonky Logic, AKA Dwayne Kilvington, originally hails from Leeds but has since become a shining light of the London scene. Currently a performing member with Strut Records signees, ONIPA, and a former collaborator with various artists and groups such as Steam Down, Emma-Jean Thackray, K.O.G. and many more, Dwayne draws his inspirations from a wide range of sources.

Elements of Hip-Hop, P-Funk & Dub collide in a sound pallet made up of organic sounds and synths, combined in a unique humanly style and fashion.

Joining the dots on the night will be the resident Worm Soundsystem DJs, get down early as we vibe inside of one of Bristol most cherished independent venues: The Jam Jar. Tell a friend to tell a friend!

As always we want our people to be comfortable and free to be themselves at our events regardless of age, gender, sexuaity, racial or national identity or any other way people define themselves! Come ready for a good time, leave any preconceptions or bad attitude at home, don't be a dick and have fun!

Please consider donating a little extra towards Headfirst at checkout for tickets. They have been such an intergral support system for independent promoters, artists and venues alike within Bristol and it would be hard to imagine life without them.

We reserve right to ask for proof of a negative lateral flow test in order to gain entry to events. 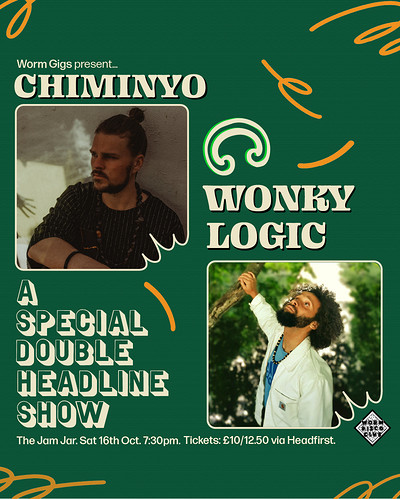