“The magical world of Yama Warashi harnesses a kaleidoscopic and playful energy. They make a hugely welcome return to the stage with their hypnotic psychedelic jazz and electronic experimentations.”
Join the Headfirst mailinglist for recommendations.

18+ event.
--
Yoshino Shigihara came into 2019 needing a change. The Japanese artist had been based in Bristol ever since co-founding the now defunct Maloya-infuenced raucous psychedelia collective Zun Zun Egui. She then blossomed on her own across an EP and two albums of more meditative but no less territorially transcendent records as Yama Warashi. As in her music, though, Yoshino has always had a sense of wanderlust and it was perhaps no surprise that she’d eventually want to move again – this time to London.
“Moving to London gave me the chance to work with more diverse musicians” Yoshino says. “And I wanted to be here too because of the high creative energy, the diversity of the music and art here and the people who live here.”
The first material to come out of her relocation is a bold advancement of her sound, her third album Crispy Moon. Recorded at the Total Refreshment Centre in London with Kristian Claig Robinson, with most of the mixing coming from Hannes Plattmeire and mastering by Zun Zun Egui guitarist Stephen Kerrison, there are new contributing members, as well as some older friends. Compared to the more lo-fi, homespun feel of early releases such as Moon Zero and Moon Egg, there’s larger brush strokes at play, a bigger sound and an understated but self-assured grandeur. You can hear it in the adorning strings that underpin Dou Dou Meguri’s outré pop, or Makai No Keiyaku’s driving cacophony of Afrobeat rhythms and chiming synth-pop that stomps right through the middle of the record.
These bolder moments don’t detract from the playfulness that’s always infiltrated Yoshino’s music; take Yuru Yuru, for instance, that sees woodwind and strings giddily tumble over themselves in a rush to get the song up and running, before settling into a strutting jazz rhythm; or Saku Saku, which starts off like Free Design meeting Fela Kuti before snowballing in momentum to a delirious finale that sees percussive and melodic elements all scrapping for space.
The album started to come together at the increasingly legendary Total Refreshment Centre - a choice in-part due to how much Yoshino enjoyed the sound of Rozi Plain’s album What A Boost which came from sessions there, as well as Kristian Claig Robinson’s other work there. Her friend Alabaster de Plume is also a resident there. Yoshino also threw herself into creative London life, working at Café Oto and becoming absorbed by the frequently eclectic and varied improvised jazz that dotted their programming, joining the global psychedelia-inspired 30-piece choir Haha Sounds Collective and making friends with the likes of Trash Kit and Vanishing Twin.
Yoshino herself has now become a TRC resident, but before Crispy Moon came to life there, she went to PRAH Studios in Margate with a band including Cathy Lucas (Vanishing Twin), who demo’d some bass tracks and helped to record the record, as well as Aletta Verwoerd on drums and Mermaid Chunky’s Moina Walker on sax. Previous collaborators Conrad Singh from The Evil Usses and Lewis Fitzjohn also returned on electric guitar and bass.
Lucas’ Vanishing Twin band mates also appear, with Phil MFU popping up on Umi no Mon and Susumu Mukai collaborating on Dividual Individual. Singh’s The Evil Usses bandmate and long-time Yama Warashi collaborator Dan Truen also returns on percussion, while Agathe Max – who plays with Yoshino live as a duo, with a fluid cast of other members sometimes joining them – appears regularly on violin. Meanwhile, Coral Rose Kindred-Boothby aka The Silver Field and former Go! Team member Angela Won-Yin Mak play bass and guitar respectively on Yuru Yuru and Chokkan To Moussou.
Much of the move and Yoshino’s experiences of being in the capital have made their way into the themes of the record. “Makkuroi Mizu – meaning black water – comes from craving to be in nature after moving here” Yoshino says. “I went to Victoria park, and found a nice spot by the trees and a pond which looked great from far, but when I got there, the water of the pond was black.”
The song deals with the artist’s attempt to find a quiet spot in the sprawling city but took on a new meaning post-pandemic when she found that she in fact wanted to be near people as well.
Yuru Yuru, meanwhile, is about being slow and zen amidst the city’s fast pace. “I was amazed how people walk fast after living in Bristol 17 years” Yoshino laughs. “People would be pushing and trying to overtake each other to get out from tube stations and I realised I was starting to do the same, so I made an effort to be slow and relaxed.”
Then there’s something like Dividual Individual, a vibrant slice of hemisphere-straddling maximalist pop that elongates and recoils throughout. It’s a song about veganism and the difference between individuals, such as humans, animals, fish, insects, that if you cut into they die; and dividuals like plants, bacteria and mushrooms that’s cut pieces are able to grow anew.
For Yoshino, though, while the lyrics are important, they’re also largely personal. The drive for her is to get across the universality of her music, to keep an open ear and absorb everything that she can before returning it back out into the world. Moving to London has only strengthened that for her, with new collaborators, fresh experiences and altered perspectives. Crispy Moon is the colourfully brilliant end result. 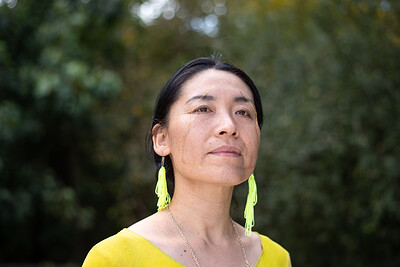