It’s Magpie Park after dark where the serious shit goes down, you’re drunk, you’re in pain, the last year has taken its toll. In the distance you make out a shadowy figure, it’s rodent-like back curves towards a razor sharp nose, it’s the silhouette of your arch foe. River Rat appears from the darkness, blood drips from his teeth as he stumbles towards you. He leans back and lets out a raucous scream. Sweat drips from your snout, you growl under your breath. The fight has begun.

Having played at festivals across Europe and live on BBC Radio 6, BETHLEHEM CASUALS are back and this time they’ve got a story to tell. With the release of their second album ’The Tragedy of Street Dog’ just around the corner, the casuals are bringing a cocktail of tribal rhythms, psychedelic vocals and raucous noise to your doorstep.

You’d be a fool to miss it.

‘All over the place in the best possible way’ - Marc Riley, BBC Radio 6

‘Bethlehem Casuals play a dexterous, sunny, party band clatter – an overspilling box of afro-beat, ska, and jazz being carried down the stairs with clumsy aplomb. However – this is a strut translated and twisted into something wilder by a myriad of influences from the world beyond Manchester’ – Pink Wafer Club

'Sounds like a 21st Century hybrid of XTC and Steely Dan but in a very, very good way’ - Tom Robinson, BBC Radio 6 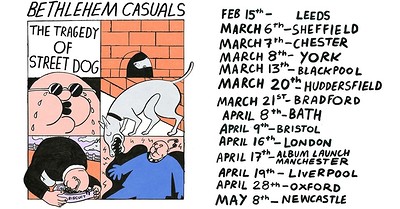