“Dust off your airhorn and touch the clouds for the anointed Godfather of Rave, DJ Slipmatt OBE. The chart-topping legend of SL2 is returning to the golden age of ‘adrkore with a special ‘93 - ‘94 set of euphoric breakbeat action and helium-vocal delights. ”
Join the Headfirst mailinglist for recommendations.

SLIPMATT
A man who needs little introduction. Rave legend, resident DJ at Raindance, chart hits as a member of SL2, to say that we’re excited to have Slipmatt at the Loco Klub is an understatement. He’ll be bringing a stack of ’93 and ’94 hardcore euphoria from the heyday of the hardcore / jungle crossover for a special extended set.
soundcloud.com/slipmatt-1

DJ SOYBOI
A Manchester based DJ and Producer who aims to provide your daily dose of protein through a healthy, nutritious mix of jungle, footwork and hardcore that will leave you feeling refreshed and ready to throw shapes. Drawing as much inspiration from Chicago and Berlin as from the UK, DJ Soyboi's head-spinning blend of jungle, footwork, and 4x4 kicks is way ahead of the curve. The face behind CLUB60 on Balamii, DJ Soyboi knows their way around tunes that consistently break the legal speed limit.
soundcloud.com/djsoyboi

Manchester's resident hot girl FKA Hardcore is known for many things, not least her incoherent social media presence and love for all things turbo. Whipping from IDM chuggers to 180 BPM jungletek without so much as a beatmatch in between, she's destined for the stars. Her recent Keep Hush was one of the platforms' most memorable sets ever, we can't wait to welcome her to WORKS with a special extended b2b with Soyboi.
youtu.be/lrZelw1DJZY

DROMEK
With his debut EP £50 Pints on Moon Rack racking up radio plays from Dead Man's Chest & Etch, DROMEK brings his own style of precise, syncopated and grainy 170BPM oddities to the party in a flurry of granular timestretch drumglizm, swooning lo-fi textures and deft loop choppage.
soundcloud.com/dromek

PORTWAY
Softcore label head honcho Portway is a genre defying chameleon: his output ranging from 100bpm chuggers to 170 tearout jungle. Fresh from a huge headline set at Area Code and racking up recent support from LCY, A.Fruit, Skream and more, Portway is certainly one to watch for the coming future.
soundcloud.com/portway-portway-portway

GOLDMAN
Half-time // Slow/fast / WORKS Records bossman Goldman has been pushing 160bpm music in the UK for more than 3+ years now. With recent releases on Nu Kvlture and forthcoming tracks on Trax Haven, Excess, and a solo EP on WORKS, you can expect all kinds of styles, from footwork to jungle tekno and beyond.

DJ LAZERGUN
The mysterious WORKS resident & Halftime Slowfast co-founder DJ Lazergun will be warming things up with an assortment of breaks and footwork. Be there or get zapped.
soundcloud.com/djlazergun 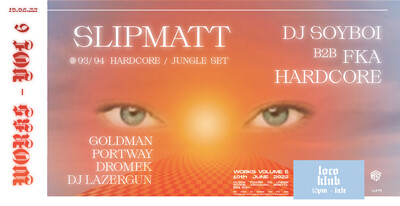