The Halloween Masked Ball returns to its nefarious nocturnal haunt at Los Flambardos, Helston, Cornwall, on Saturday October 27, for another chapter of dark ritual, this time taking its cue from Voodoo.

This year at Los Flambardos you can trip into the psychedelic voudon theme park with leading practitioners of electronic music and performance voodoo. Join thrill seekers dressed as skeletons, voodoo goddesses and psycho killers for the all-night Voodoo odyssey.

The Halloween Masked Ball has grown to become one of the largest Halloween parties in Europe with the dedication to costume and outlandish dress equaling only the tenacity to party. Running from 6pm – 6am in a nocturnal theme park, the addition of overnight camping makes this a Halloween experience not to be missed.

Amongst those honoring the spirits will be drum and bass heavyweights Hospital Records returning to the Kingsford Temple to awken the voodoo in you with some of the UK’s finest D&B talent including Danny Byrd, London Elektricity, Kings Of The Rollers, Logistics , S.P.Y, Whiney + Dynamite MC and Ruthless + Fava.

Or leave the Earth's gravity behind and lose yourself in the waves of Viscera’s intergalactic voodoo techno in The Cosmodrome with head honcho of the renowned Frankfurt nightclub ‘Live at Robert Johnson's’ Ata, Melbourne’s off kilter king, Francis Inferno Orchestra and The Viscera DJs

The many traditional venues of worship are still to be announced in the next few weeks including The Voodoo Lounge, Fangz Nightclub, The Altar Stage, Durty Discos Voodoo Temple, The 45 Live Voodoo Shack and Loose Peoples Ward 9 alongside some new additions.

Hellraising, spine-chilling rides will be free at Los Flambardos – including the brand new the Sky- Force. Rising 25 metres above the ground exerting a force of up to 3G while spinning 360 degrees and carrying up to 40 people, the Sky-Force is the biggest ride in the south west and sure to extract some ear-shattering screams.

Since its inaugural event in 2006, hosted in the depths of darkest Cornwall, The Halloween Masked Ball is one of two of the bi-annual jamborees of hi-jinx, frivolity and hedonism that have earned the events a loyal following.

The Masked Ball is a walk on the wild side and boasts a strong and varied musical line-up, set among a myriad of curated, stunning venues. The party is a strange and surreal sideshow of fairground follies, rock ‘n’ roll posturing and freak show craziness, all waiting to be discovered in a nocturnaltheme park where strange things happen. A myriad of rooms, dancefloors, dens, hidden bars and unpredictable nano-venues, eccentric humour and epic raves, set to a soundtrack of New York disco, primal chants, cosmic guitar licks and terrifying techno.

Kings Of The Rollers

Oh My God! It's The Church! (Voodoo Special) Panda

Plus Many More TBA 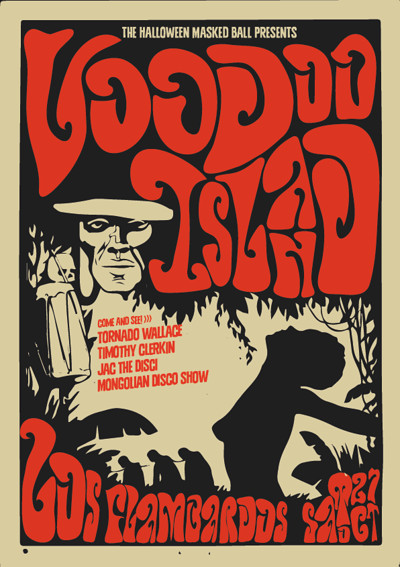