What?! Laughter on a Wednesday? Surely not...

The frivolity! The hump day isn’t supposed to be fun. It’s supposed to be for scrabbling at the walls as you fret over tomorrow’s meeting. It’s for compulsively watching gripping, but ultimately unsatisfying, netflix series while you wish away the hours until the weekend. It’s certainly not for enjoying top drawer entertainment for a deliciously low price in the transformed upstairs of your favourite local boozer. There’s no commandment that says ‘Thou shalt be merry on a Wednesday’. That ain’t in the scriptures. Well, call us iconoclasts, but here at No.51s we don’t care. We’re putting the ‘eek’ in weeknight (and the ‘easy’ in cheesey) with our first ever live comedy event…

Josh won the prestigious English Comedian of the Year award after just two years in comedy, and is widely considered one of the best comics on the circuit. A real master of the craft, he’ll have you doubled over thanks to his tight story-driven sets packed full of jokes. Or as the cool kids would say: “man’s got punchlines for days, bruv”.

All strung together by your host for the evening, Calum McCarthy.

Or for the best value, comedy + pizza is just £10 (advance purchase only, arrival by 7pm). 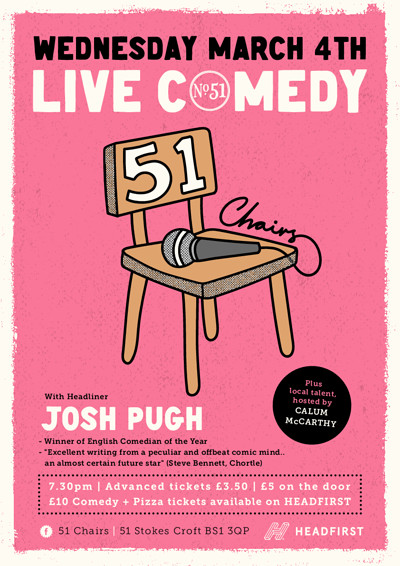