Who Owns the Land?

Land ownership in the UK reflects the huge inequalities in the country, with a 2019 survey revealing that half of England is owned by 1% of the population.

In urban centres this inequality is leading to rising numbers of homeless people and an increasingly precarious situation for ‘generation rent’, even as the landlords see ever increasing profits as house prices continue to rise.

In rural areas, unequal land ownership means that most of our countryside is hidden behind fences, remote and invisible for the vast majority of the population, with only 8% of the countryside and 3% of rivers available to the public.

This problem is huge and its history long, but this is not a reason to be disheartened. The battle for land and housing rights is a fundamental one that can impact on almost all other struggles – from improving physical and mental health to reducing inequality or lessening our environmental impact. And it is a particularly urgent fight now with the Tory government following on from their 2011 criminalisation of squatting by promising to introduce a bill which will criminalise trespass, thus removing all of the non-criminal ways that the population had available to informally redress this shocking imbalance (until the criminalisation of squatting it was understood in our common customs that those who did not own any land had the right to make use of land owned by others).

In this session, two veterans of the struggle for land equality present the two very different approaches they have taken to finding solutions to some of these issues.

Author and artist Nick Hayes is a campaigner for the Right to Roam, which campaigns to extend the Countryside & Rights of Way (CRoW) Act in England so that millions more people can have easy access to open space, and the physical, mental and spiritual health benefits that it brings. His latest book The Book of Trespass is an impassioned call for greater access to the countryside. Weaving together the stories of poachers, vagabonds, gypsies, witches, hippies, ravers, ramblers, migrants and protestors, and charting acts of civil disobedience that challenge orthodox power at its heart, The Book of Trespass shines a light on the deep injustices of land ownership and access in the UK, and paints a picture of the fairer, healthier society we could build if we tackle these problems head on.

Land and housing activist (and one of the directors of the PRSC) Keith Cowling is one of the driving forces behind the Bristol Community Land Trust, a Community Benefit Society owned by and run on behalf of its members, with the remit to provide affordable and sustainable housing in the city. As their website states: “Our purpose is to enable people, many of whom have little access to the traditional housing market, to realise their vision of building sustainable homes and creating inclusive communities”. Keith has also helped to set up the Stokes Croft Land Trust, which hopes to purchase property in Stokes Croft (starting with the PRSC HQ building) to hold as community assets outside of the pressures of the commercial property market in perpetuity, so the local people will always have affordable, accessible community resources in their neighbourhood.

If you are sick of the inequality and lack of access that the UK’s approach to land ownership supports, if you feel inspired to become a campaigner for land justice, or if you just want to know more then don’t miss this session. 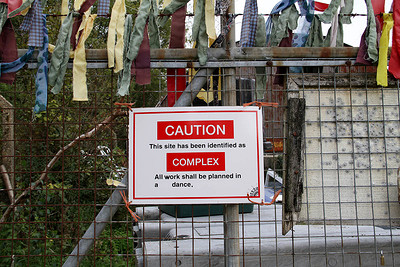