Natalie Evans and Bonniesongs will both be live in-store at Rough Trade BRISTOL to perform two special acoustic sets of tracks from their new albums, both released on Small Pond Records.

(BBC INTRODUCING)
"Beguiling, enveloping… her delicate yet empowered songwriting carries within in it deeply personal truths."

GOD IS IN THE TV
Fusing a virtuosic talent on guitar, harp and piano with a distinctive playing style and finely tuned songwriting sensibilities, Kent-born Londoner Natalie Evans’s music glows with a rare self-contained grace, as she wraps her minimalist and deceptively simple lyrical lines in winning hooks and harmonies.

“I enjoy pairing catchy, pop-sounding lyrics with more complicated guitar; it creates a sound that I find really fun”, Evans elaborates. “I think the style of guitar I play comes from listening to emo and math rock in my late teens, but even before then I loved learning fingerpicking songs that used alternate tunings. I also enjoy the technical aspect of writing music that I find difficult to play. I like to challenge myself.”

With an international cult fanbase already hanging on her every note, Natalie Evans’s debut album ‘Better At Night’ (and several single releases from the record) saw her intricate compositions and characterful vocals reaching more ears than ever before. Heavy support across BBC 6Music from Huw Stephens, Lauren Laverne, Guy Garvey, Radcliffe & Maconie - to add to the likes of Nick Luscombe (Late Junction, BBC R3), BBC Introducing, John Kennedy (Radio X), and live sessions for Robert Elms (BBC London) and BBC Radio Kent - has been joined by a wealth of press, podcast and playlist support, a widespread live tour, and festivals including ArcTanGent.

Although she’d had no classical training, a fascination with classical music inspired Evans to learn piano and harp in recent years, her talent and studious approach leading her to achieve an exceptionally high standard. These instruments add to her mastery of the guitar, which began as a teen hobby and became something of an obsession when she discovered the finger-picking style that she has gone on to make her mainstay.

“Classical music is still new to me”, says Evans. “While I love writing vocals, I feel like I can really express myself on the piano without the need for words. And I also enjoy writing string arrangements; it's then really exciting when I get to hear all of the parts played live, especially because I couldn't even read music until quite recently.”

Natalie Evans has inspired comparisons with folk sensation and fellow harpist Joanna Newsom, while she is influenced as a songwriter by eclectic artists including Jeffrey Lewis, Warpaint, Björk, Sufjan Stevens, Taken By Trees (solo project of The Concretes' Victoria Bergsman) and TTNG. Her early career has seen her winning fans via self-releases including the “Houses” EP, and the aforementioned Delta Sleep hook-up. She has also worked with TTNG (Sargent House) side-project The Otter Years, and Apidae (Dumont Dumont), and released a two-track split with US rising star Yvette Young, which tied in with a tour of California. Evans has played extensively in the UK, alongside established acts including Laucan (Sunday Best), Tall Ships (FatCat), Tera Melos (Sargent House), and Big Scary Monsters signings Delta Sleep and Tangled Hair. Her upcoming debut album marks the coming of age for this constantly surprising artist and captivating performer.

Born and raised in Ireland, Bonniesongs is the musical moniker of Dublin/Wicklow native Bonnie Stewart. “They’re basically the same place,” laughs Stewart, as she explains her origins, “but Ireland is small, so to Dubliners I'm from Wicklow, and to Wicklow folk I'm from Dublin...” Like many young artists with one eye on the wider world, a longing for a change of scenery saw her move halfway across the world to Sydney, Australia, almost seven years ago, when Stewart was in her early twenties.

A family background in music found it focused front and centre in Stewart’s world from a young age, her multi-instrumental leaning being something that blossomed almost immediately as she moved from the keyboard to guitar, then drums, and on to singing in school choirs. As such, Stewart’s unique blend of musical influences is often hard to pin down, but its roots are easier to trace. Growing up amongst a vibrant and inspirational DIY punk scene that solidified her love of music, Stewart went on to study jazz at university, where she attained a BA (Hons) degree in jazz performance on drums.

Her own music has previously been likened to some weighty names, including Cat Power, Joanna Newsom, and Bjork, but Stewart’s personal influences are as wide-ranging as her songwriting, and she excitedly reels off a hugely diverse list that encompasses Juana Molina, Buke and Gase, Tuneyards, Jose Gonzalez, Sufjan Stephens, Nirvana, This Is The Kit, Aldous Harding, Julien Baker and Tiny Ruins. “I think everything you love and listen to is in there as an influence,” she says, “including so many of my talented musician friends. Growing up, my musical hero was Dave Grohl, but then, as I studied jazz, people like New York-based drummer/composer Jim Black and Melbourne composer/pianist Andrea Keller became more important to me.”

Putting her jazz background to use and beginning many writing sessions experimenting on guitar or utilizing her trusty vocal looper, Stewart’s music is often characterized by the repetition and expansion of simple ideas into something much more complex. “I really enjoy using my looper as it allows me to open up a musical idea quite quickly,” she says. “I love the sound of layering and it’s a necessary writing tool for me. Drums are my main instrument and I feel like I’ve never really gotten that good at guitar or harmony instruments, so I use my voice to layer the harmonies I’m hearing.” With hundreds of half-written songs and musical ideas in the voice memos of her phone or lurking on Logic, it’s the act of repetition and revisiting old ideas that seems to unlock a finished song for Stewart, as she shrugs, “I just keep coming back to them and give them time”.

With strong notions of family and her own ancestry weaved through everything she does, Stewart is deeply rooted, at least in some regards, it seems, in a yearning for, or re-examination of, the past, but that’s not to say she’s not optimistic about the future. 2019 is a big year for her: moving house, releasing Energetic Mind, various touring plans with her many creative projects, and planning her forthcoming wedding. “I’m writing and performing for a new Circus Oz show called Wunderage,” she says, “and also performing some of my songs as a murderess character for a show called Le Coup at Edinburgh Fringe festival, so I’m excited for that! I’ll be doing a UK tour in late September, which I can’t wait for, and then I’ll come back home and launch and tour the album in Australia. After that I plan for my family to finally fly out to Australia and witness me marrying a lovely kiwi man who happened to play bass on the record. Anyway, that might be a bit too personal…”

Personal maybe, but it feels like that final uniting of her old world with the new is symbolic of the catharsis that Stewart has found through writing Energetic Mind, (to be released in September 2019) and through finding her own musical family, in general. “Now I think about it,” she remembers haltingly, illustrating the point perfectly, “the first few days of recording for the album were in Alyx’s parents house in the hills. Alyx’s dad is a musician so we used his basement studio. I stayed there a few nights, and was so happy to be part of the family dinners. It was so great to start the process off with such a homely family vibe. If I could do nothing else with my life but create music and hangout with that dream team that would be good. Well, maybe that plus the beach!” 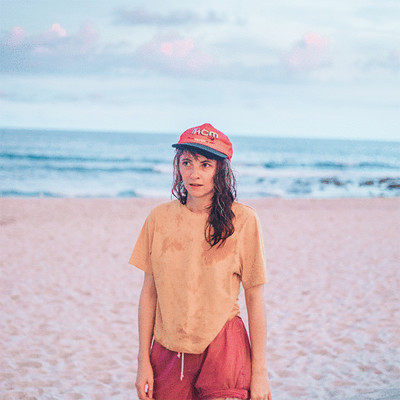