We’re excited to be bringing West another heavy duty lineup, but this time taking the chaos to a new location, in Rough Trade Bristol. We have invited down Yowl, who join us for the Bristol leg of their UK tour, who will be joined by two exciting prospects in Brighton’s GURU, and Bristols' own The Pleasure Dome. Expect the usual offerings of DJ’s providing the soundtrack between sets, and an after-hours event to keep you going till late.

Led by the modern-day lyrical wordsmith Gabriel Byrde, Peckham based 5-piece YOWL released the latest EP ‘Atrophy’ in the autumn of 2019. YOWL are a band that consistently demonstrate a potent ability to channel frustration with mid-city living into a churning marriage of sleazy indie and post-punk. They have spent the last year entrenching their reputation as a band able to cast a menacing shadow on record and on stage. The band were named in DIY’s ‘Class Of 2019’, have been supported by NME, Loud & Quiet, BBC Radio 6Music and have played alongside IDLES and LICE as well as festivals including Picthfork, Avant Garde and London Calling Amsterdam.

‘Sonically its impossible to pin down; a manic concoction of Post-Punk and driving electronic distortion. The result is an EP of rare depth that firmly stands the band apart from their peers.’ —DIY

Having exploded onto the scene in late 2018 with gripping debut effort Consumer Helpline, the rising four-piece have wasted little time making a name for themselves, ripping up stages throughout the UK on a sold-out tour alongside Lady Bird and brewing a fierce reputation for their chaotic live show and charismatic performance.

Evoking heady comparisons to indie figureheads Shame and Fat White Family, the punk quartet’s latest material is a thrilling insight into the world of GURU with potent lyricism, crunching riffage and bold, visceral approach demonstrating their electrifying potential and firmly justifying the hype.

Bobby, recalling a dream from the night before, saw a flash of an enormous amusement arcade from the future, and it was called: The Pleasure Dome. Four blokes coming out of Bristol, surrounded by the sound of a generation - visceral, cathartic, and honest, with tales of overtime, smoking and heartbreak like those overheard down the pub.

Once again captaining the ship and in charge of the dissemination of aural treats, is The Milkshake Boys. Packing a box for Rough Trade full of 50% vinyl encouragement, and 50% panna cotta, this pair will ensure movement in all the right places. 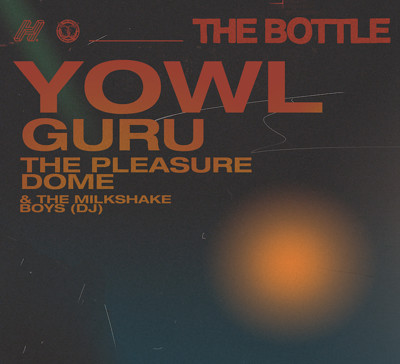