“As vital a statement on what it is to be alive in 2019 as any of the more celebrated, male, bands currently garnering all the praise." Louder Than War

“A tempestuous debut, Emily Breeze's album Rituals accentuates the drama of its songs, swathing them in black humour”. Mojo Magazine

Suzie Stapleton and her band are heading to Bristol to celebrate the release of 'Thylacine', the first single from their highly anticipated debut album which is set for release in Spring 2020.

Since relocating from Australia, Stapleton has been captivating UK audiences with electric live performances, midnight vocal, and guitar-driven noir soundscapes. Over the past few years she has released a string of singles and EPs, guested on Lydia Lunch & Cypress Grove’s recent desert blues albums, and contributed to The Jeffrey Lee Pierce Sessions Project alongside Nick Cave, Mark Lanegan, and Debbie Harry.

This is their first full band show in Bristol so be sure to grab tickets early.

“You’d need to bandy around names such as Thurston Moore, PJ Harvey, Siouxsie & The Banshees, Mark Lanegan and Marianne Faithfull… People would get the general idea – yet would still come nowhere close. What she actually sounds like – more than anything – is Suzie Stapleton. The emerging new wave of assertive and gifted female artists is both urgently needed and one of the few bright spots in an otherwise ever more worrying world." 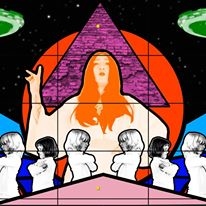