A key figure within the lo-fi New York hip-hop scene of the 2010s and 2020s, rapper and producer Medhane infuses his bars with intense reflection and poignant anecdotes. Working in near-constant collaboration with other members of the movement, the musician released his debut full-length, Own Pace, in November 2019. Born and raised in Brooklyn, Medhane-Alam Olusuola excelled both in artistic and academic prospects from a young age. In addition to skipping two grades and attending the prestigious NEST+m academy, the young Olusuola was a regular figure at the Ifetayo Cultural Arts Academy, an arts organization working with children of African heritage. After enrolling at Pittsburgh's Carnegie Mellon University in 2014, he got his start in the music game, working with Slauson Malone as Medslaus on the explosive 2015 EP Greys in Yellow and the 2017 full-length follow-up Poor Boy. Medhane's solo debut was soon to follow; the EP DO FOR SELF landed in September 2017, with features from MIKE and Sixpress in a showcase of the lo-fi New York scene. From here, Medhane moved from strength to strength. After the well-received Ba Suba, Ak Jamm EP (2018), and a plethora of featured work, the rapper released his first full-length project, Own Pace, in November 2019. With collaboration from Slauson Malone, Caleb Giles, and Navy Blue, among others, the project continued Medhane's work within the cutting-edge New York scene, delivering introspective slices of life over expansive production. A shorter project, February's FULL CIRCLE (2020), demonstrated Medhane's production skills while teasing the release of another full-length project. This album, entitled Cold Water, arrived in May that year. Featuring atmospheric soundscapes, poignant narratives, and a wealth of features (Maxo, Chuck Strangers, Navy Blue), the record consolidated the musician's emotive style.

Medhane is reminiscing about Future’s untouchable mid-2010s mixtape run, when the Atlanta star seemingly couldn’t sneeze without unleashing another classic. “That shit turned him up!” he says excitedly over Zoom. The 23-year-old’s abstract, reflective raps are certainly a far cry from Future’s supervillain laments, but he was inspired by the work ethic. And over the last six months, the Brooklynite has been on a similarly prolific tear with Own Pace, his motivational breakthrough; the self-produced Full Circle; and this week’s Cold Water, his best album to date.

On the new record, his verses scan like daydreams strung together during a long subway ride, while the production recalls the crate-digging beats of A Tribe Called Quest. In other words: some New York shit. Medhane is an everyman, and his thoughts are both personal and relatable, whether he’s rapping about conversations with his mom, getting out of spiritual ruts, or the importance of his community. Cold Water is rooted in pain, but it’s not hopeless. It’s a coming-of-age story that could resonate with any black kid. “Everyone has an experience of their own,” he tells me. “This is where I’m at.”

Listening to his introspective tracks can sometimes feel like a surreal invasion of privacy. “Two weeks in the hospital bed/Mind moving weird/Crazy that I made it through the year,” he raps in a deadpan flow on Cold Water’s “All Facts,” without further explanation. His lyrics are powerful because of their subtlety, because of what’s left out. You still get it—even when you don’t fully get it. His smooth beats, often courtesy of producers within his tight-knit artistic community, help connect the dots.
Medhane is part of a constantly growing grassroots movement of artists from New York and beyond, including Bronx rapper MIKE, Brooklyn collective Standing on the Corner, Chicago-bred singer KeiyaA, North Carolina’s Mavi, and Alabama’s Pink Siifu. “It shows the multitudes behind the experiences of young black people,” Medhane says of the scene. “It’s spread so far, and everyone has their own take on it.”

Their community is best represented at live shows, which can feel like family reunions. Small, loyal crowds always make it out, no matter if the performance is being held in a proper venue, a clothing store, or a yard. This past November, Medhane performed at Brooklyn’s Cafe Erzulie, an intimate cultural hub. During the show, the audience gathered close, helping with words that needed extra emphasis. “It’s like walking on a burnt bridge/All them years I ain’t learn shit,” Medhane rapped that night, while the crowd, squeezed so tight that it was hard to breathe, nodded along with every word.

Even during a pandemic, his day-to-day hasn’t changed much. He’s still in his Park Slope crib doing the usual: writing, recording, smoking. A microphone hovers over his shoulder as we talk, and I hear the flick of a lighter as he turns away from the camera. There are several art pieces spread across the wall behind him, including a particularly large one with elephants that he copped from an African street festival. “We’ve been quarantined before quarantine, in here workin’,” he says, the words sounding like a stream-of-consciousness line from one of his songs.

Medhane-Alam Olusuola was raised in the heart of Brooklyn, between his mother’s home in Bed-Stuy and his father’s in Prospect Heights. Like anyone who grew up on the internet, his musical appetite is varied. His formative influences include everyone from fellow Brooklynite Biggie Smalls to Chicago’s drill ambassador G Herbo to warbling London crooner King Krule. He first learned about Gil Scott-Heron, a major inspiration, after hearing the legendary poet and musician’s album with electronic producer Jamie XX. “I even have a video of me doing the cooking dance to Lil B’s ‘Suck My Dick Hoe,’” he says, slightly imitating the move.

He spent much of his childhood and teenage years as a part of the Ifetayo Cultural Arts Academy, which aims to empower kids of African descent. There, he practiced and deepend his connection to the arts, balancing it with an intense focus on his schoolwork. Early on, Medhane skipped two grades. “In first grade, the teacher thought my mom was doing all my homework,” he remembers. (She wasn’t.) He went on to attend NEST+m, a highly selective public high school in Manhattan that specializes in fostering STEM skills. He excelled, graduating at 16. After a gap year encouraged by his mom, he enrolled in the nationally recognized civil engineering program at Pittsburgh’s Carnegie Mellon University in 2014.
Medhane’s connection to hip-hop grew alongside his education. With the release of 2015’s Greys in Yellow, a project created alongside producer Slauson Malone under the Medslaus moniker, Medhane began to take rap seriously. It became difficult for him to return to college in the summer of 2017, as his like-minded community came into their own with releases like MIKE’s May God Bless Your Hustle and Standing on the Corner’s Red Burns. “But I was like, ‘If I don’t finish school, my mom is gonna look at me crazy,’” he says. There were times when he dipped out for a show, though: Once, in the fall of 2018, he took off on a Thursday night to rap in London and was back in Pittsburgh for class on Monday morning. “That shit spun me, bro, I was really fucked up. I was just dealing with personal issues and feeling mad depressed,” he remembers, choosing his words carefully. “‘I really gotta go back to school after this?’”

After his return from London, Medhane had a breakdown. He took a hiatus from recording and spent most of his time binge watching The Wire. He went to therapy once while at school, but never went back. After he graduated last spring, Medhane’s grandmother gifted him and his cousins a trip to Kenya, using money she had saved up. It was the refresh that led to his recent creative outpouring.

“My grandma grew up in the Coney Island projects—she had siblings addicted to heroin—and she’s done so much in her life,” he says, sounding slightly exasperated, like it’s hard to get the words out. “In Kenya, I was looking at the horizon with my family and just being like, ‘Yo, everyone has their own trauma and mental health issues.’ I put it into context, seeing what my family has overcome, and what black people have overcome. If they can do that, I can too.” 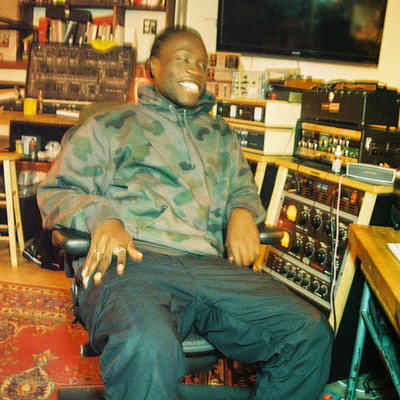