The thing is, says Sergio Pizzorno, he didn’t intend to make an album like SLP at all. After he finished touring behind 2017’s For Crying Out Loud – Kasabian’s fifth number one album in a row - he liked the idea of doing a solo record: “I’ve been making a new Kasabian album every couple of years since 2004, I have my routines and I have the way I like to work, and I just think I felt I needed a re-set, so that I could approach the next Kasabian album from a different place”.

Nevertheless, he thought that his solo album would sound… well, like you might think a Sergio Pizzorno solo album would sound. He is, after all, famed not only as Kasabian’s chief songwriter, but a man dedicated to pushing esoteric influences – from MF Doom to Bulgarian psychedelia to avant-garde electronica – into the sonic framework of a mainstream, stadium-filling rock band. A solo album, you could reasonably expect, would be a chance for Pizzorno to let his freak flag fly, unencumbered by the need to make music fit to headline festivals and huge gigs.

“But what I found happening was that I was listening to a lot of Tyler The Creator and Mac Miller. I was in that world. I sort of got rid of all my synths and guitars and just sort of had phones and laptops and just picked out sounds. And it turned out like it did, and I thought it just felt right. In a way, it’s probably a bit more of a psychedelic move for me to do this than just to make the record I expected.”He says he found himself writing songs that didn’t end up how he imagined they would at all.

“There’s a track called Trance, which is a love song, it’s an end-of-the-night, sun-going-down, that beautiful moment. There’s a kind of French sophistication to it, it’s quite laid back, but it’s still got an ending that’s huge and euphoric and anthemic. It lulls you in. It doesn’t really want to be an anthem, it wasn’t really supposed to be, but somehow, I got to the end and thought ‘this is huge’. I love the idea of that twist, of people thinking ‘oh, right, I’ve got this’, then it suddenly turning into something else. That’s the thing about the album really, it kind of throws you all over the place.”

It certainly does. In fact, it’s fair to say that SLP isn’t an album that anyone could anticipate: an intriguing, unprecedented split between filmic instrumentals – audibly partly inspired by Roy Budd’s iconic soundtrack to the 1970 British gangster flick Get Carter – and richly melodic songs influenced by hip hop and grime. 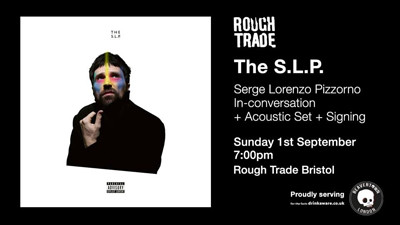