"Just think if The Chameleons met Mogwai in a dank basement. You’re getting there. A slow builder that crashes in with that classic dark Manchester sound from the Hannett days. Excellent production and sweeping gloomy guitar sounds that shudder and shake with authenticity, A top as fuck band that don’t shy away from their influences and paint their own picture in this world of post punk labeled music that should, by rights have a new label to distance themselves from the usual Fall, goth comparisons."
- LOUDERTHANWAR.COM

The drums are played with the tusks of Mammoths, the bass is strung with the hair off the devil’s back and the guitars have chainsaw attachments that all combine to batter down your door without an invitation. The vocals croon and swoon with equal parts car salesman charm and kidnapper threat which lure you into your car and turn the volume up loud so nobody else can hear you scream.
- listenwithmonger.blogspot.com

***WAKEY WAKEY RISE & SHINE***
Wakey Wakey Rise & Shine are a bunch of guys trying to make it in the big bad world at their own pace. Creating a psychedelic sonic landscape attached with facetious personalities and lyricism, their most recent single - Overtime - has seen support from BBC Radio 6, BBC Introducing South & West and Amazing Radio with Tom Robinson including Overtime in his BBC Introducing Mixtape and describing the single as "an irresistible slow grower!" 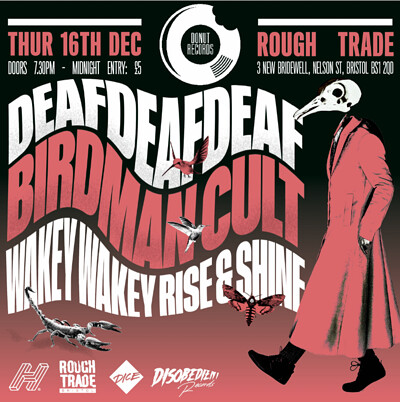