Devin Tuel may consider herself to be an artist meant for a different time, but the singer-songwriter now finds herself inhabiting her own true place as she releases her third album Happier Now, released under her nom de plume, Native Harrow.

Native Harrow cuts out clear and vibrant narratives on fear, love, the open road, ill-fated relationships, and coping with the state of the world. “I wanted to share that I made it out of my own thunderstorm.” says Tuel. “I had experienced the high peaks and very low valleys of my twenties. I saw more of the world on my own, got through challenges, reveled in true moments of triumph… but all the while the world around me was growing louder, wilder, and scarier. Music for me is a place to be soft. This album was my place to feel it all.”

Happier Now - recorded and mixed at Chicago’s Reliable Recorders by Alex Hall (JD McPherson, The Cactus Blossoms, Pokey LaFarge) and co-produced by Hall, Tuel, and her bandmate, multi-instrumentalist Stephen Harms - oscillates between feeling the sting of uncertainty (“Can’t Go on Like This”), the beauty of California (“Blue Canyon”) and the ache for lavish stability (“Way to Light”). You could say Devin Tuel wears her heart proudly on her sleeve, but that’d be underplaying the exact gravity of her stories. Each starlit image is framed within her warm, enveloping vocals and the careful, profound considerations of Harms’ musicianship. Start to finish, the new record pours forth from her very bones, and you get the overwhelming sense she has never been more daring and honest than right now. 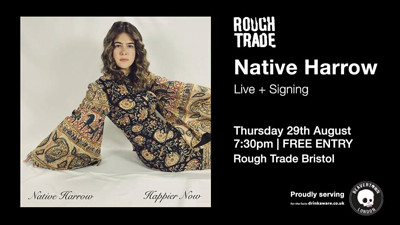