My Life Story will be live in-store at Rough Trade BRISTOL, celebrating the release of their new album 'World Citizen', released 6th September.

STEVE LAMACQ BBC 6 MUSIC
With a string of top 40 hit singles and albums in the 1990s, epic pop pioneers, My Life Story received huge critical acclaim with their brand of grand, orchestral pop, leading many artists of the Britpop era to feature them on their records. Heading up this clever, witty and beautiful wall of sound is the charismatic frontman Jake Shillingford, famous for his sharp tongue and even sharper suits. Vocalist and songwriter Shillingford has cowritten and coproduced the highly anticipated album ‘World Citizen’ alongside guitarist Nick Evans creating a new and distinctly rockier sound.

‘World Citizen’ will be released via Exilophone Records on 6th September and is preceded by a single the inordinately catchy ‘Taking On The World’, released on 23rd August. 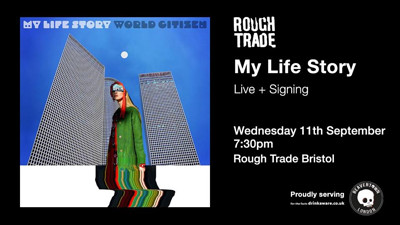