A Life in Fifteen Gigs with Graham Duff

This event is FREE ENTRY, with the option to pre-order a BOOK + ticket for both or either artist, and we will have your guaranteed album ready and waiting to collect on the day of this in-store.

'Foreground Music: A Life in Fifteen Gigs'
The result of a lifetime's passion for gig-going by one of British television's most respected writers, Foreground Music is a memoir of a life lived through music. From a Cliff Richard gospel concert aged 10, to a Joy Division gig that erupted into a full-scale riot, Duff recounts the highlights of a gig-going career in which he goes on pub crawls with Mark E. Smith of The Fall, convinces Paul Weller to undertake his first acting role, and attempts to interview Genesis P. Orridge of Throbbing Gristle while tripping on LSD.

Foreground Music captures the energy and power of life-changing gigs, while tracing the evolution of forty years of musical movements and subcultures. But more than that, it's an honest, touching, and very funny story of friendship, love, creativity, and mortality, and a testimony to music's ability to inspire and heal.

“Foreground Music is an absolute gem. Charming, very funny and often achingly melancholy, Graham Duff's memoir is suffused with a genuine passion for live music and its (occasionally eccentric) power.”

Graham Duff
Graham Duff is a prolific and distinctive screenwriter. Often taking inspiration from the worlds of music, horror and art house cinema, Graham’s scripts mix genres and cross boundaries. They also attract some of the biggest names in British comedy.

For Radio 4, he wrote Mark Gatiss’ long running sci-fi sit-com ‘Nebulous’, as well as adapting Alexei Sayles’ short stories for the comedy drama series ‘The Absence of Normal’. As a script editor, his work includes the feature film ‘Alan Partridge: Alpha Papa’ and all 50 episodes of Radio 4’s Sony Gold award winning ‘Count Arthur Strong’s Radio Show!’ which he also directs. As an actor he’s appeared in numerous comedy shows as well as ‘Doctor Who’ and the ‘Harry Potter’ films.

Before becoming a respected TV and radio writer, in his early years Graham worked for the video department of Manchester’s legendary Factory Records, before forming his own performance art group, then DJing both on radio and in clubs and touring internationally as one half of a comedy double act.

Music has always been a hugely important part of his life and his work. These days Graham presents the on-line music show Graham Duff’s Mixtape and every December the Dangerous Minds website posts his review of the year’s top 20 alternative music albums. He estimates he’s attended over 500 gigs, some of which are chronicled in his first book: ‘Foreground Music: A Life in 15 Gigs’. 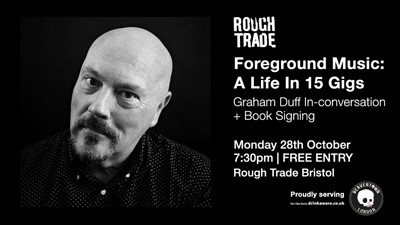