Very excited to be bringing back Miles from Akron/Family with his new trio, as part of his UK tour. Support from the tremendous Black Spring and some weird percussion experiments from me and Dan, all in the fantastic acoustic of St. Stephen's. This'll be special.

£5 in advance from Headfirst
£7 on the door

“Party music this is not. This is music that I imagine many people listening to, on the train, eyes closed, trying to imagine they’re alone. In the car, in the morning, as dawn breaks; late at night, windows rolled down, wind rushing in. It’s music for transient moments, liminal spaces, music for moving while sitting still. It’s lonesome music. But it is not about running away or being defeated, although I had to do those things to get here"

"Imagine one of those classic stoner rock crews – Sleep, perhaps, or Om – hunkering down in the Black Ark to cut some sides for Hyperdub with an Apollo-era Eno casting a quizzical eye over proceedings.” - We Need No Swords (Paul Magree)

Formed in 2013, the trio have since released a brace of tapes via their own label and on the very excellent, Structured Disasters from Aylesbury.

In 2016 Black Spring released a limited edition split cassette with Miles Cooper Seaton - on their own Monocreo label which received fine reviews by The Quietus and The Wire:

Most recently, Black Spring have been recording site specific improvisations. The first of these was recorded in an audibly large space at MK Gallery in March 2017. The physical release of the music will be paired with a limited edition Risograph print and is set for release in September 2017. 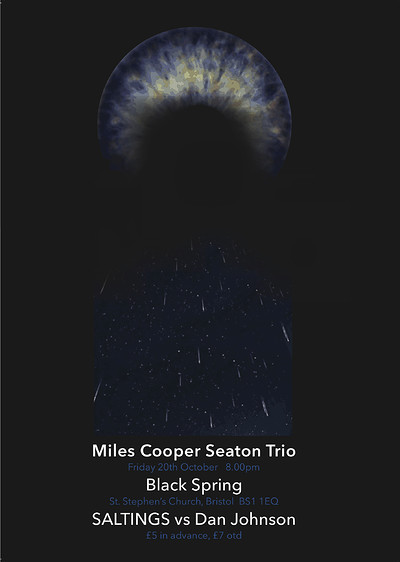