Entry is free w/donations for the bands.

Thomas Stone creates his immersive music using contrabassoon, samplers and activated percussion. Blurring the boundaries between electronic and acoustic sound production the compositions explore themes of ritual, memory and presence.
An enforced simplicity runs throughout the dreamlike sound world conjured from slowly evolving motifs accompanied by a hiss and murmur from the percussion and pulse driven samples breaking to moments of fragile beauty. Utilising incorporated projected visuals live performances range from the intimate where the focus is on the physicality of producing the music to the large scale where the audience is able to lose themselves amongst the gentle dissonances and cyclic rhythms.

SALTINGS will do his best to destroy all that.

Dominic Lash is a freely improvising double bassist, although his activities also range much more widely and include playing bass guitar and other instruments; both writing and performing composed music; and writing about music and various other subjects.

He has performed with musicians such as Tony Conrad (in duo and quartet formations), Joe Morris (trio and quartet), Evan Parker (duo, quartet and large ensemble) and the late Steve Reid. His main projects include The Dominic Lash Quartet, The Set Ensemble (an experimental music group focused on the work of the Wandelweiser collective) and The Convergence Quartet.

His work has been broadcast on a number of radio stations, including BBC Radios 1 and 3 and Germany's SWR2, and released on labels including Another Timbre, b-boim, Bead, Cathnor, Clean Feed, Compost and Height, Emanem, Erstwhile, FMR, Foghorn, Leo and NoBusiness.

Since moving to Bristol he has been involved in organising concerts under the banners of Bang the Bore and Insignificant Variation.

“I have no idea where this will lead us, but I have a definite feeling it will be a place both wonderful and strange.” - Dale Cooper 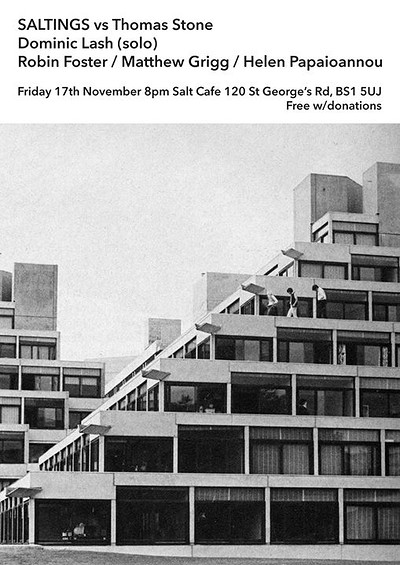