Performing live stand-up for the last 14 years – with four Edinburgh solo shows under his belt – Tom has been the host of his own TV, radio and online shows on BBC2, BBC Radio1, The Capital FM breakfast show, plus host of Gfinity Esports shows and YouTube football channel Copa90 – where his Eurofan escapades have notched up over 8 million views.
Tom has made guest appearances on BBC2’s The Rob Brydon Show, Dave’s One Night Stand and ITV2’s Fake Reaction

With 23 letters and a hyphen, ChristianRussell-Pollock is technically one of the biggest names in comedy.
Lauded as “a stand out stand up” by Taking the Mic, Christian is an award winning performer who has been entertaining audiences across the country since his debut in 2016. Since then, his friendly, affable nature combined with his carefully crafted brand of incisive jokes and witty stories has seen him become a firm crowd favourite. He’s won the Ha-Hart Comedy Awards (2019), been a finalist at Comedy Gladiators (Heat Winner) (2019), at Stand Up for Cider (2019) and been support for Simon Evans and Lost Voice Guy.

With support from Lavana Chrish, Walter Jack & hosted by Greg Winfield
*This event is held in our downstairs event space and as such is not wheelchair accessible 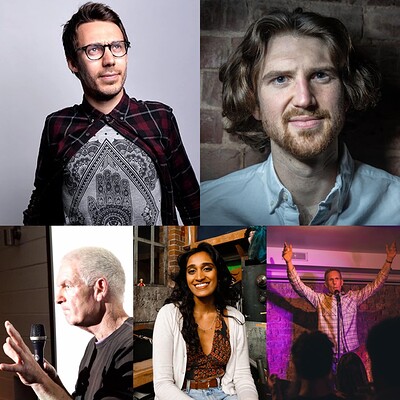