Joe is a comedian, actor, writer and former model.

With a caustic, catty wit and unapologetic confidence, he has taken the UK comedy circuit by the balls, and the circuit liked it. Selected for the Pleasance Comedy Reserve at the Edinburgh Fringe in 2015 and a finalist in the prestigious NATYs awards and Leicester Square Theatre New Comedian, Joe now performs at the biggest and best clubs in the country.

Also working as an actor and writer, he has been seen in the movie Pride and written for really cool publications that you probably haven't heard of.

The Mirror - "Takes to the stage like an old pro, oozing star power from every pore. He combines borderline offensive self-confidence and biting punchlines with an openness that leaves the audience totally tamed."

Chortle - "Demands attention... He exudes a star quality, and on his own terms... Definitely one to watch."

An accomplished writer for radio and television, Rajiv was the winner of the prestigious BBC Contract Writer Bursary 2021 (alongside Tasha Dhanraj), and has written material for The Now Show, The News Quiz, Dead Ringers, Olga Koch: OK Computer, and Alex Edelman’s Peer Group on Radio 4. For television and online, he’s written for The Comedy Guide to Life and Bad Advice with Olga Koch on Dave. His sitcom pilot script Zoners (co-written with Ish Ganjoor) was shortlisted for the Amazon Writerslam 2019.

As an actor, Rajiv appeared as series regular Jam in the London Live original series Content Content, and played Ranj in the Turtle Canyon Comedy film Grave New World for Vimeo and Amazon Prime. He will appear in the upcoming series of Malory Towers on CBBC, and the upcoming Lazy Susan series for BBC Three.

Rajiv is an up-and-coming voice on the London stand-up circuit. In 2019, he was shortlisted for BBC New Comedian of the Year. In 2021, his work-in-progress show, Gallivant, was produced by Berks Nest and enjoyed a sold-out limited run in the Pleasance Cabaret Bar at the Edinburgh Fringe. “Dry wit akin to Jack Dee or Romesh Ranganathan” VoiceMag. Tour support for Olga Koch.

*****
Support from Jessie Nixon, Martin Talbot & hosted by Comedy Den Regular Burt Williamson
*This event is held in our downstairs event space and is not wheelchair accessible 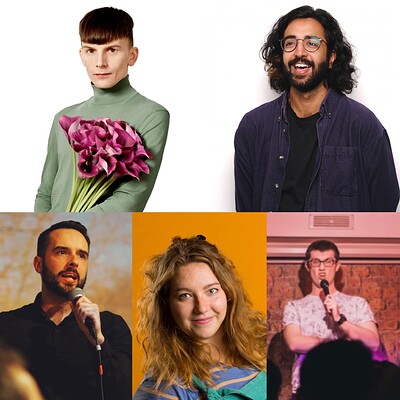