Welsh, working-class firebrands The Death Hilarious are a sketch-centric comedy duo cut from the same rag as The League Of Gentlemen and The Mighty Boosh. They parade a coterie of crazed characters such as Creole exorcists, apelike weirdos and a homemade sex robot. Variously described as immersive, horrifying and joyous, The Death Hilarious mix the profound and the puerile with no thought for their own safety. They dissect and reassemble sketch comedy with the relish of Josef Mengele. They never sleep, these boys. They are dancing, dancing. They say that they will never die.

“This darkly impressive debut is packed with countless elements rich, strange and deviantly chilling…” – The Scotsman ★★★★

"Immersive and brilliant comedy… amongst the funniest double acts I’ve ever seen." – The Bristol Post.
As heard on BBC Radio 4.
★★★★JAMIE ALLERTON★★★★ 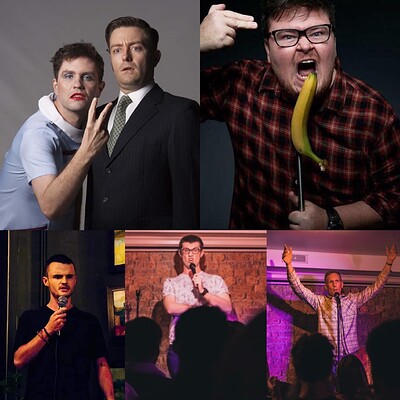