Aaron performed his critically-acclaimed debut show, Disabled Coconut, at the Edinburgh Fringe in 2019. He reached the final of the Amused Moose Comedy Award competition for best show and was nominated for Best Comedy Show in the Broadway World UK Edinburgh Fringe Awards. He also performed a work-in-progress show called, Aaron Simmonds And The Person That He Loves, at the 2018 Edinburgh Fringe.
"This show has the best, the most beautifully constructed and the most unexpectable narrative line of pretty much any I have seen...his hour belts along on wheels of laughter. "
★★★★ The Scotsman

*****Joe Wells*****
Joe Wells made his name as a political comedian with critically acclaimed Fringe shows including 'Night Of The Living Tories' and '10 Things I Hate About UKIP’ in recent years he has moved into more personal material about mental health and being autistic.
Joe is a favourite amongst other comedians and has supported Frankie Boyle, Alexei Sayle and Stephen K Amos.

In 2020 Joe went viral with his stand up clip 'Joe Wells on having a non-autistic brother' which gained over 1.3 million views across Twitter, Facebook and YouTube.

"A star of the future... some of the most surprising and thought-provoking material coming from any comedian in his early 20s" The Guardian

*****Alexandra Haddow*****
Alexandra Haddow has supported Jack Whitehall and Frankie Boyle as well as hosting a number of pro monthly nights across London. She is one third of What’s The Deal Comedy productions, one third of the School for Dumb Women Podcast, and runs Alex vs. Men every Monday at Vauxhall Comedy Club.
‘One of the most exciting new acts on the circuit.’ - Frankie Boyle
*****
Support from Richard Spalding & Host Comedy Den Regular Greg Winfield
*This event is in our downstairs event space and as such is not wheelchair accessible 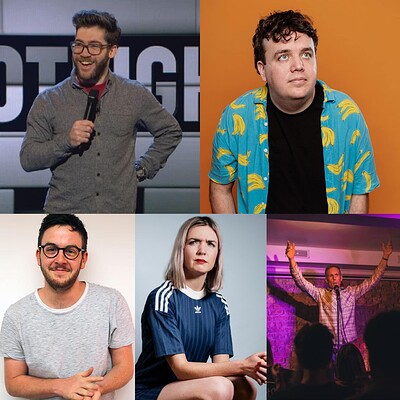