All our Wednesday shows sell out so make sure to get those tickets ASAP!
Line-Up:
*****Radu Isac*****
Radu Isac is a veteran Romanian comedian. He moved to London in 2015 and in 2017 made it to the final of the English Comedian of the Year competition.

His stand up was featured on multiple BBC and Comedy Central programs. And in 2019 he wrapped up his second solo show at the Edinburgh Fringe Festival.

"intelligently subversive'' - The Scotsman
“still making me giggle” - Three Weeks
“The audience loved it and I think you will too” - CounterCultureUK
"certainly impressive" - BeyondTheJoke.co.uk
"simultaneously sweet and dark" - Chortle

*****Fiona Ridgewell*****
A twenty-something year old female, who has a skewed look at her life experiences whilst continually looking to achieve a fairy-tale life. Fiona has won a number of stand up comedy competitions including 'The Blackout' at Up The Creek (twice) and Beat the Gong at the Comedy Store London in December 2014. Also in that year she performed in Edinburgh in the semi-final of the renowned competition 'So You Think You're Funny?'. Most recently Fiona was a finalist in Funny Women 2020. 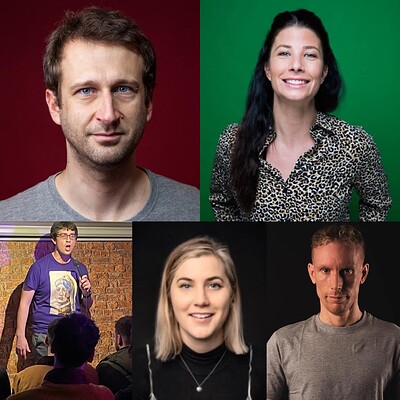