Andrew Bird is a top headline act up and down the country and has performed all round the world.
He has been tour support for Rhod Gilbert, Rob Brydon and Michael McIntyre including appearing at Wembley and the O2.

He’s one of only seven comedians to perform for Banksy at Dismal Land. He’s written on TV shows Jon Richardson’s Ultimate Worrier, 8 Out of 10 Cats Does Countdown and Lee Mack’s Duck Quacks Don’t Echo and is a regular guest on BBC Radio’s The Rhod Gilbert Show.

Leicester Mercury Comedian of the Year nominee (2022) Louise Leigh is living proof that a midlife crisis doesn’t have to involve a Harley Davidson and an underwear model (yet).

Since starting to do stand-up aged 43, she’s performed at The Savoy Theatre (Monmouth), the Palladium (Bideford) and the Bristol Hippodrome as well as countless pubs, village halls and comedy clubs throughout the country.

In 2019, she took her show Louise Leigh Identifiable to Brighton Fringe and the Edinburgh Fringe Festival, where in a short run, it got a 4 star review from the Wee Review and was selected as One of the Best things to see on the Free Fringe by Edinburgh Live. 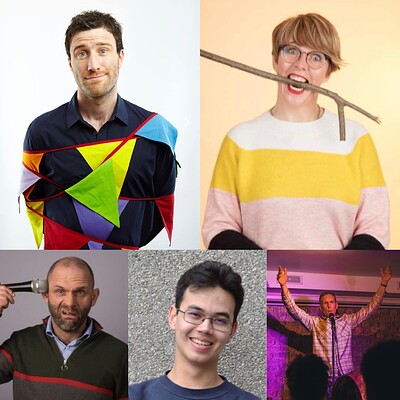