★★★★★ Josh Pugh ★★★★★
Hot off winning the Midland New Act of the Year in 2014 and 2015, Josh Pugh rapidly shot to the upper echelons of UK stand-up, winning English Comedian of the Year 2016, only two years after playing his first gig.

He also won the Funhouse Gong Show as well as the Best New Act prizes at both the 2015 Birmingham and Nottingham Comedy Festivals.

Josh’s clever, original, and (most importantly) very funny writing and performing continues to bring in plaudits, from Chortle to the Londonist to the London Evening Standard, and he undoubtedly has a blindingly bright future.

★★★★★ Abi Clarke ★★★★★
Abi is a stand-up comedian based in Bristol who took to the internet in 2020 due to Lockdown, and achieved remarkable success. In her first year online, she amassed over a million followers across Instagram and TikTok.

11 comedy stars of the internet… – The Independent

‘A seriously clever comic… a thing of pure joy’ – You 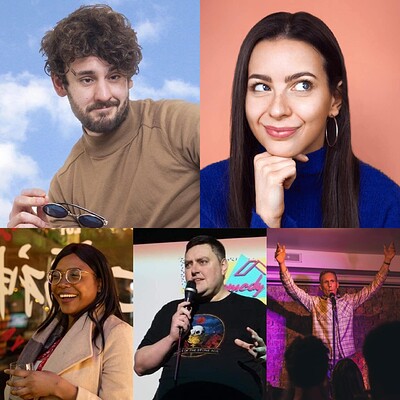