A celebrated actor, comedian and writer in television, radio & theatre. He is best known for his work with Ricky Gervais on Derek (Channel 4), After Life (Netflix) and Gervais and Merchant’s Life’s Too Short (BBC). His acting credits include Ghosts (BBC), Trying (Apple), Almost Never (CBBC), Four Weddings and a Funeral (Hulu), This Time with Alan Partridge (BBC), Being Human (BBC) and BBC3's award-winning Murder In Successville.

Colin is a successful character comedian – he is well known for his celebrated ‘has-been actress’ character Anna Mann and has received great critical acclaim for his live shows, which were listed among the best-reviewed comedy shows at the Fringe by British Comedy Guide.

“A unique and darkly brilliant talent”
The Guardian

Ben was Piccadilly Comedy Club New Comedian of the Year Winner 2017 and has placed as a finalist in So You Think You’re Funny and Comedy Cafe New Act of the Year 2015.

He started comedy at university where he was the President of the Cambridge Footlights (2013-14) and has been doing stand-up for seven years (as an act and MC). He has toured internationally with the Footlights, and gigs regularly as a stand-up across the UK. Ben has previously worked with the award-winning NewsRevue, and appeared on Comedy Central’s Achievement Unlocked and BBC New Comedy Award on Radio 4 Extra. 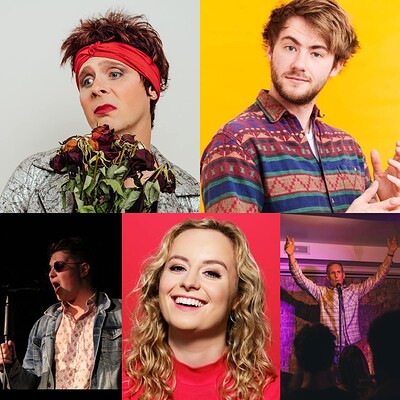