The creation of Dan Renton Skinner – a member of the Dutch Elm Conservatoire Sketch group – Angelos Epithemiou is the owner of a burger van who wants to break into showbusiness.

He got his break in 2009, when he became a permanent team member on the revival of Shooting Stars, replacing Johnny Vegas on Ulrika Jonsson's Team B, before becoming the scorer.

Nominated for the breakthrough award and best sketch or character act at the 2010 Chortle awards.

*****Simon Lomas*****
Simon is regarded as one of the most exciting and refreshing new acts on the circuit. Already making big waves, this ungainly and socially awkward geek will doubtless go on to big things as his distinctive style is matched by superb jokes with a highly unique delivery. He’s already a multi award wining act and is being widely talked about a ross the comedy industry – catch him now while you can!
“Imaginative, delightful wordplay” Chortle
“Sharp and solid joke writing” The Skinny
*This event is held in our downstairs event space and as such is not wheelchair accessible 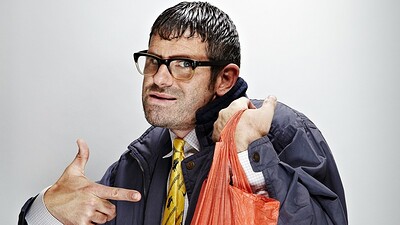