Charlie Bowers (Winner of Standup For Cider 2021) hasn't felt at peace ever since he saw an iguana in the men's toilets of a London pub, and now he has some thoughts to share - most of them unrelated. Deadpan musings and rambling stories from an award-winning comedian.

"With some beautifully crafted routines, a masterful control of tension, and an uncompromisingly strong on-stage persona, Charlie Bowers is an exciting act with a big future."
- Comedy Kerfuffle
"Charlie Bowers is unique, distinct and downright hilarious. A master of the deadpan delivery, banal whimsy is crafted in to comedic potency to great effect."
- Capers Comedy

A real double F. . . French & Fabulous! Based in south London, Brixton, Arielle Souma adds colour and diversity to the comedy scene. Her distinctive style is punchy, blunt, accessible and empowering!
Arielle is Leicester Mercury Award Nominee 2021. Additionally, she is the winner of the
Frog and Bucket World Series 2016 and
Beat the Frog January 2016, finalist for
New Act of The Year Show 2017, for So You Think You’re Funny, and Fresh Comedian of the Year in 2016, and for Golden Jester, and the Max Turner competition in 2015. 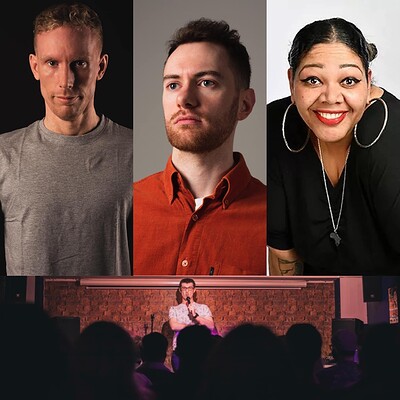