For one night only, Spike Island hosts a night of visionary contemporary live music, running late in the main gallery space and kicking off a weekend of talks, installations, workshops and performances led by European artist collective AUDINT.

Underscored by radical and queer politics, Elysia Crampton’s eclectic and unrestrained electronic music gives sonorous form to contemporary expressions of Aymara resistance and survival: a project of “becoming-with,” in the shades given this term by Donna Haraway via prison abolitionist Che Gossett.

Coby Sey is a London-based vocalist, musician and DJ who has developed a distinctive presence as a performer and producer offering a shifting, disorienting vision of club music. A long-time collaborator with Mica Levi, Tirzah, Babyfather, Klein and Kwes, Coby’s recorded work spans the realms of live instrumentation, sample-based productions and experimental music, melding recognisable motifs of hip hop, drone, jazz, grime and more into a dubbed-out anaesthesia.

Laurie Tompkins writes and performs playful, erratic music for instruments and electronics, as well as co-directing experimental imprint Slip with Tom Rose and Susie Whaites, where he has independently championed a burgeoning generation of fringe artists working with sound both in the UK and further afield.

Oliver Coates is a cellist, composer and producer based in London. He was the winner of the Royal Philharmonic Society Young Artist Award 2011 and is an Artist in Residence at the Southbank Centre. Coates recently released a solo record, Upstepping, on PRAH Recordings, and a collaborative record, Remain Calm, with Mica Levi on Slip.

SIREN is a collective started in 2016 which exists to challenge and re-define current preconceptions within dance music, whilst bringing to the fore those underrepresented in the scene. The collective’s resident DJs and VJ like to explore a realm of aesthetic possibilities when playing together, focussing on unusual shapes and textures, and conceptual ways of experimenting with their mediums. SIREN DJs zigzag across techno, electro, breakbeat, minimal, acid, jungle, bass, experimental club music and trance --their sets never staying long in one place or era. As a collective, their parties, zine and monthly NTS Radio show aim to be musical and political platforms for women & non-binary people, as well as a space to critique current trends within electronic music and create their own alternatives.

Stretching from 1944 to 2064, AUDINT's audiovisual presentation takes in histories and speculations from the WW2 Ghost Army to the Wandering Soul strategy in Vietnam; from phantom sonic economies to the Walking Dead Syndrome; from exhumed holographic rappers to holosonic warfare. 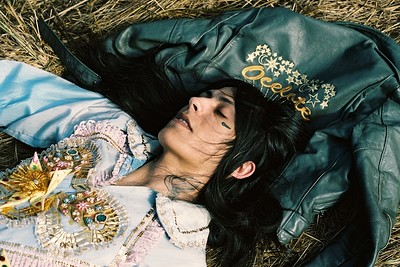