— Spike Island
A special live performance by avant-garde composer Curran with a group of local artists and musicians
price: entry is free

On the opening evening of When There Is No More Music to Write – a two-person exhibition by Eric Baudelaire and Alvin Curran – Spike Island hosts BEAMS, a special live performance by avant-garde composer Curran with a group of local artists and musicians.

The performance is based on a structured improvisation of singing, shouting and activating a set of “found” musical instruments, all gathered according to a broad definition of what an instrument can be. It follows a series of closed workshops between Curran and the participants earlier in the week.

This preview evening runs from 6-8pm with the performance starting around 7pm.

Spike Island presents When There Is No More Music to Write, a two-person exhibition by artist and filmmaker Eric Baudelaire and avant-garde composer Alvin Curran. Curated in collaboration with music historian Maxime Guitton, the exhibition includes three new films by Baudelaire, two large-scale ‘sound sculptures’ by Curran, and an archive display assembled by Guitton. Together these works give an overview of Curran’s life and work since the early 1960s, tracing a musical revolution that took place in a time of radical political mobilisations in Italy, which reached a boiling point with the kidnapping and subsequent murder of politician Aldo Moro by the Red Brigades in 1978. https://www.spikeisland.org.uk/programme/exhibitions/eric-baudelaire-alvin-curran/

On the same night, Terratypes, a major solo exhibition of new works by Tanoa Sasraku that build upon the artist’s ongoing research into hostile wildlands and personal relationship to the energy, mythology and memories stored deep within the British landscape.
https://www.spikeisland.org.uk/programme/exhibitions/tanoa-sasraku/ 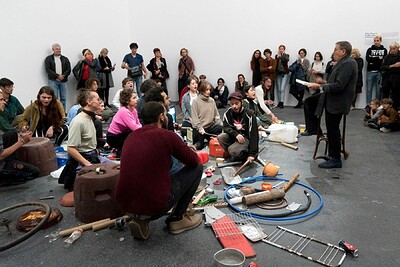