Microdot returns with another excellent and varied line up with two contrasting pianists and a classical Tenor.

Sophia Surenovna McKett is of mixed parentage and, being half Russian, quarter Sri Lankan, quarter English, has had exposure to the music and cultures of both East and West. She began music studies at the age of 6 and gave her first piano recital at the age of 11 at the Russian Cultural Centre in Colombo. Further studies continued at the Gnessin Academy of Music, Moscow, whose alumni include pianist Evgeny Kissin and conductor Evgeny Svethlanov. There she was trained by professors Margarita Volkova (solo), Leonid Block (chamber ensemble) and Victor Vlasov (voice accompaniment). During her six years in Moscow Sophia actively participated in Academy concerts performing both in chamber ensembles and solo. After graduating with a Master's degree she went on to perform in wide ranging concerts both in Russia and Sri Lanka, where she appeared as soloist with the Sri Lanka Symphony Orchestra. The following year Sophia completed the master classes of the legendary pianist Vitaly Margulis in Freiburg, Germany.

Now settled in England Sophia has appeared in many solo concerts including at St.George’s, Brandon Hill as a participant of a master class held by Mikhail Kazakevich. Sophia has regularly accompanied mezzo soprano Caroline MacPhie (Countess of Munster Trust scholarship winner) and has an on going piano duo partnership with pianist Giuseppe Bavetta. In 2009 Sophia worked as an accompanist at the Aberystwyth Music Festival in Wales. Shortly after she founded the Sonacri Piano Trio with violinist Naomi Rump and cellist Chris Greenhalgh with whom she has performed widely. Her most recent collaboration has been with violinist Sara Stagg.

Much in demand and a sought after tutor, Sophia teaches at Wells Cathedral School, Clifton College and Badminton School where she occasionally accompanies students at competitions. Sophia also has a successful private teaching studio with many prize winning pupils and enjoys passing on the rich traditions of the Russian School of piano playing.

American born, tenor Robert Short has taught voice for over twenty years and has been singing for over 30 years. He began his music career at the age of eight in the Prince Georges County Honours Choir; singing in Washington DC at the Kennedy Centre for Performing Arts and eventually went on to study voice with renowned professors of music such as Mignon Dunn, Thomas Carey, Samuel Bond, Francoise Loup and Marsha Henderson. Robert won a coveted space in the Opera Academy of Rome during the summer 1999.

Robert received his Bachelors of Arts Degree at the University of Oklahoma, Norman Oklahoma. Then he went on to receive a first class honours certification in Education from Catholic University of America, Washington DC. Robert also studied music, culture and language at University Blaise Pascal in Clermont Ferrand, France. Just recently he completed a course of study in Theology at the University of Wales.

Matthew passed the Piano Performance Diploma of the London College of Music (DipLCM) in 2006. Since then he has not only gained resident pianist status at some of the most prestigious hotels, restaurants and venues in the South West he’s also booked regruarly for wedding ceremonies and receptions. He’s also accompanist for singers/instrumentalists of many different styles. Matthew performs solo piano concerts frequently to promote his debut solo piano album entitled Classical Piano.

Matthew also has a very busy teaching practice where he teaches piano privately from his home in Bedminster. He also composes a wide range of music. In 2010 Matthew decided to leave the world of playing synths in bands and pursue a solo composing career. Since then, he has been composing for Library music companies with his works being synched on TV shows like prime time BBC1’s The One Show, various Channel 5 programmes and National TV in Poland and Romania. He also composes and releases ambient/electronica music under the name Phonseca who’s debut album Between a Dream is out now. It has received global airplay and very positive revues. Tracks were also played on Gideon Coe and Steve Lamacq's BBC6 Music shows.

Matthew will be drawing on one of his biggest influences, film music, playing a set of film soundtracks from the likes of composers Craig Armstrong, Yann Tiersen, Clint Mansell and more. 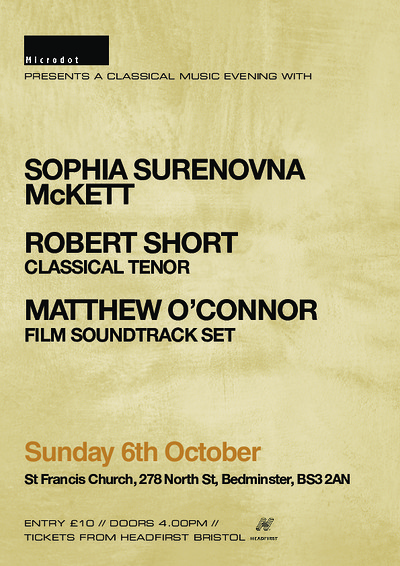