Back to the Future w/ Bayete, Disk Frisk & more

— Strange Brew
Cosmic club diggers take you on a journey through Africa, the French Islands, the Caribbean and 80's / 90's electronic oddities
price: Tickets Below

The Bayetë spirit is all about eclecticism and worldwide grooves. For this session Norm from the crew will bring out his best finds from their Youtube channel in order to take you on a journey through Africa, the French Islands, the Caribbean as well as 80's & 90's electronic oddities.

With a monthly "Rhythm Through the Night" show at Le Mellotron as well as previous podcasts for Rinse FR, Paris and NTS radio, London, Bayetë are among the most promising crew of DJs/diggers to arise in the Parisian landscape of tropical music enthusiasts.

Disk Frisk, a new record shop based in Bristol, spans music across all genres of underground music and specialising in old second hand records. Run by Kayne the Hermit and Morey Cillar. They have had shows on NTS and Noods radio.

Kayne the Hermit is a has had several residencies in the past with Noods radio (including his wicked "Kayne & The Kozmos" series) as well as churning out numerous killer mixes for various record labels, such as Average Records & Growing Bin Records.

Morey Cillar is a resident at Love Inn. He also has a residency with Noods radio and runs the Continous Movement party and mix series.

Selector Millie McKee is a Love Inn resident, who has a show every Thursday, and a monthly slot on Noods radio - providing monthly picks of mind-expanding jazz, rock, fusion and everything in between.

Murphy McFly runs the Back to the Future show on Noods, showcasing the cosmic sound in 80s music. 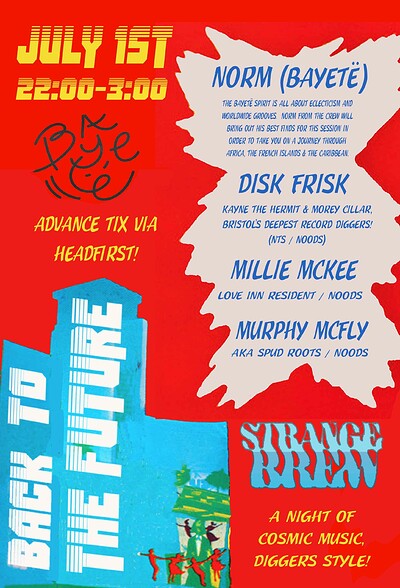