“Anarchic artist extraordinaire, defiant and confrontational on the decks, Huxtable might be the most uncompromising thing at the cross section of visual art and future DJ culture. Everyone’s one to watch right now.”
Join the Headfirst mailinglist for recommendations.

NOTE: This is the second of two events featuring Huxtable on 30th October at Strange Brew. A live art / performance event (ticketed separately) will be held beforehand.

Juliana Huxtable is an American artist, writer, performer, DJ, and co-founder of the New York-based nightlife project Shock Value. Described by Crack magazine as ‘one of the most crucial voices in current transgender discourse’, her work deals with systemic sexist and misogynist power structures, body disassociation and dysmorphia, and the radical potential of new technology.

Huxtable located to New York in 2010 where she developed her Shock Value parties, which showcased her skill of community-building within the queer underground, in addition to her electric abilities as a DJ and her ravishingly imaginative club looks.

Her sets skilfully deploy the notion of sampling, and re‐blogging as DJ strategies, ecstatically mixing an array of influences that frolic at the boundary of genre‐ intuition and experimentation.

At once an assertion of freedom and an ode to the evolutionary structure of electronic music subcultures, she aspires to the sublime in what can often only be described as witchcraft behind the decks; séance from the stage.

DJ Mooncup is a regular at London's Proteus and Free Movement nights, focusing on the weird, dark and hypnotic, drawing links between genres that seem unrelated on the surface but connect on a deeper level 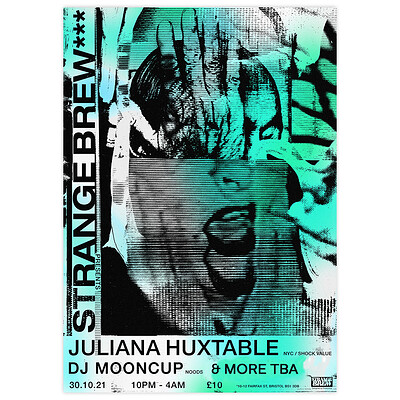