This should be pretty full on which is perfect because that’s how we like it. 8 performances, local and not so local doing 30 minute sets b2b over 7 hours in two rooms with DJs in between.
Human Leather
Furious two-piece of bass & drums destruction. Sitting somewhere between noise rock and sludge punk, this DIY outfit have been gracing stages and peeling skin from listeners’ faces, since May 2016.
During that time gigging up & down the UK, from DIY house shows to supporting Mclusky, Big Business, Part Chimp, Viagra Boys, USA Nails and Jucifer, Human Leather have delivered their chaotic savagery to all ventures and venues seeking aural abomination.
"Equal amounts fun and crushing. Well worth checking out." - RIFF.undergroound
"How two people can produce this caliber of noise and energy is incomprehensible. A flaming
meteor of catastrophic annihilation." - Apocalypse Dudes
BC: https://humanleather.bandcamp.com
FB: https://www.facebook.com/humanleatherband
IG: @human.leather

Objections
Shiny new band from The North!
Bass boss Claire (Beards, Nape Neck), Joe and Neil (Bilge Pump) only played their first gig early November so there’s not much to say but if you’re at all familiar with these Leeds legends and their previous work you know this shit’s guaranteed GOLD.
youtu.be/6MwRo-tBK1c
IG: @Objectionsband

Rattle
Rattle is a duo formed in Nottingham, comprised of Katharine Eira Brown & Theresa Wrigley. They released their first album of drums and vocals, Rattle on Upset The Rhythm in 2016 (recently featured on James Acaster's Perfect Sound Podcast) and their second, Sequence in 2018. Live, their sound is augmented by sound engineer Mark Spivey, creating a spacious, dub -influenced swirl of percussive sounds and vocals that has filled venues throughout the UK, Europe and the US on tours supporting Animal Collective, The Julie Ruin, Protomartyr & Thurston Moore Group and more. The duo are currently working on their third album, and getting ready for playing as many gigs as possible, in as many places as possible again.
BC: https://rattleon.bandcamp.com/
Twitter: https://twitter.com/RattleandRattle
IG: https://www.instagram.com/rattleandrattle/
FB https://www.facebook.com/rattleandrattle

Slagheap
Energetic post punk nonsense from four women in their pants. Melodic, naive and raucous songs from Bristol.
BC: https://slagheapband.bandcamp.com
www.youtube.com/watch?v=klZshgMmHpw&ab_channel=SlagheapBand
FB: https://www.facebook.com/slagheapbandd
IG: @slagheapband
Single Review
“Propelled by a whacky, racing energy, ‘Caffeine‘ does exactly what it says on the tin: giving a sonic depiction of the frenzied nerves incited by too much coffee, or the similarly fraught feelings induced by a first crush. As deep grunge-fuelled bass hooks are accompanied by jangling beats and raw, playful punk-inspired vocals, a shimmering cacophony is created, harking back to Riot Grrrl bands such as Bratmobile…” - Get In Her Ears

Wasted Death
Ridiculously balls-out punk band featuring Charlie Davis of Beggar, Wayne Adams of Big Lad and Petbrick, plus Tom Brewins of USA Nails. They’re a bit Extreme Noise Terror, a bit Converge, a bit Melvins, a bit fuckin’ special.
BC: wasteddeath.bandcamp.com
www.youtube.com/watch?v=jZD4m_09P2U
Album Reviews:
'an absolute monster, a frothing, snot-covered lunatic of an EP... a total banger.' - THE QUIETUS
“Deliciously depraved and grimy, for people who like their punk to have blood and rust on its safety pin and metal that gives you a black eye. Wasted Death have distilled the perfect microcosm of extreme brutality.” – THE SLEEPING SHAMAN
“Grinding metal mashing the brain matter into mush with punk snarl to make you feel like you’ve literally been chewed up and spat out. Savage stuff.” – GBHBL

Yokel ft. Dali de Saint Paul, D. Ham + Franco Franco
Whether it's as part of Avon Terror Corps, running his label Plaque, his monthly slot on NOODS radio or hosting the club night, Slack Alice, alongside Max Kelan, Anina, & Nadoone - it's not unreasonable to say Yokel has been operating in the Bristol underground for a few moons.
His live show encapsulates the scalding nucleus of his sound, moving between twisted atmospherics, rolling weirdo electronics, smoked-out sonics and ruff hip hop/dancehall infusions - a trip known to drag a string of friends and collaborators along for the ride.
BC:
https://avonterrorcorps.bandcamp.com/album/smell-of-deer
https://slackalicebristol.bandcamp.com/track/a-s-v-at-surrey-vaults
https://noodsradio.bandcamp.com/track/yokel-sporgasm
www.youtube.com/watch?v=EA-DMaRgt_E

Yo No Se
Hard rock trio incorporating elements of heavy psych and stoner rock. 2 albums to date Soma in 2015 and the latest offering Terraform which came out in 2021.
BC: https://yonoseband.bandcamp.com/album/terraform
www.youtube.com/watch?v=IEn_hy4E_hM
IG: @yonoseband

Totally understand that for some 9 acts in 6 hours isn’t enough so we’ve got D-Ham, Gray Death, Orinoco No Flow and Dad Rock Sampler to DJ as well to keep Strange Brew in sonic overdrive. 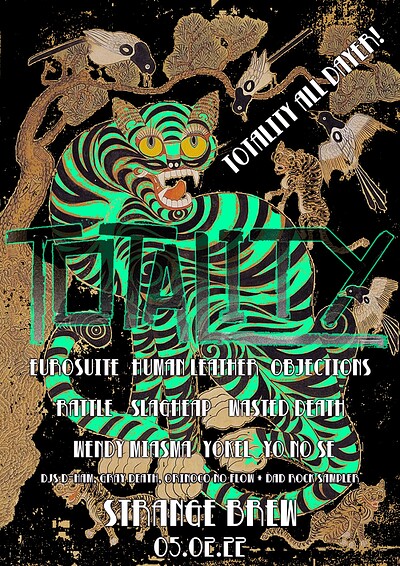