Big nasty COVID-19 continues to keep us from the rave, so to help fix us a taste of that sweet, sweaty dungeon we miss so much, GET LOOSE™ is going LIVE!

You lovely lot will be socially distanced, seated at a table with 4 of your mates (abiding to current COVID guidelines), all with a dece view of the stage. Given you'll be stuck to a chair, it made sense to take a break from the 1s and 2s and instead put on three badbwoi live acts; not only giving you a bit more to look at than a DJ scrolling through their usb files, but also give you a flava of summin fresh!

A ticket gets you a table for 5 peeps at one of the two performances, with the same acts at both: one 3-6pm and the other 7-10pm.

In good ol' GET LOOSE™ tradition, the lineup is super secret. But ask anyone who was lucky enough to go to one of the club events, and they'll probably say that they were pretty good. Well, it's more likely they'll say -
"yeh they were good but f*** me, the queue into the dungeon was so long. Sure, worth it when you finally get in there, but surely they could lower the cap or something? "
And if they say this, you'll probably reply with something like -
"yeh fair, Jess said that too. I guess with it being seated, this definitely won't be a problem. Assuming Dan doesn't overdo it and throw up everywhere, blocking the entrance to the toilets again, haha!"
-
"oh yeah haha omg that was so funny"
-
"haha innit!"
-
And you'll laugh and reminisce about that gross but really funny time. But as the laughing passes, you're both simultaneously struck with the daunting and a little depressing realisation that it's been a very long time since anything that funny has happened on a night out, because there haven't been any nights out in such a while...
You look up and catch eachothers' eyes and realise you're thinking the same thing -
"we need to go to GET LOOSE, LIVE!"

So that's sorted. See ya there folks!

Oh, but if Dan is in your bubble and sitting with you, tell him to reign it in. Jokes aside, we do need to be careful and taking a bit more care of ourselves and one another during these ~sTrAnG3~ times.

P. S. - obvs if the lockdown gets extended, the event will be rescheduled or cancelled but let's be optimistic and assume Boris will stick to his word for once. All the more reason to be good and lock it down for the rest of the month, so we can responsibly enjoy some good culture n that! 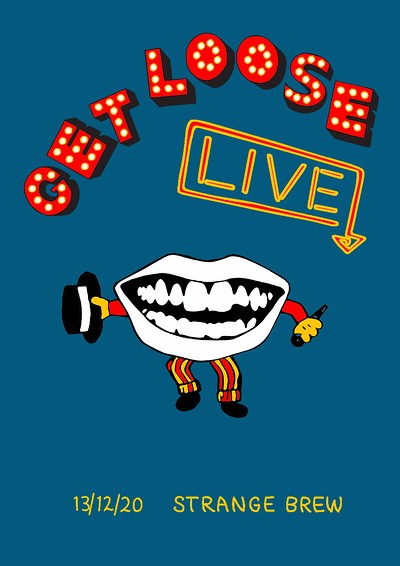