Get The Blessing LIVE

— Strange Brew
"mixes scorching rock with Ornette Coleman-like sax and much more besides to thrilling effect" The Guardian
price: Tickets Below

It was twenty years ago today, or thereabouts, that the key ingredients of what was to become the award-winning, internationally touring, musical potage Get The Blessing were first gathered together in a Bristolian deep-sided saucepan to begin the slow process of sweating...
since then, the recipe has been periodically tweaked and adapted, with unexpected spicings and unlikely additions, but the basic sofrito has remained constant: the rhythm section of Jim Barr (bass) and Clive Deamer (drums), best- known for their work with the band Portishead, and the horns of Jake McMurchie (saxophones) and Pete Judge (trumpet), two of the most distinctive players to emerge from the Southwest's vibrant jazz scene
another constant flavour has been the influence of Ornette Coleman's great early quartet. The Blessing, as it was until an enforced name-change, took its name from one of Ornette's tunes, and began as an acoustic homage to those ground- breaking free-spirited albums of the late 1950s and early 1960s, before plugging in and ploughing on in its own uncategorisable furrow
from then on, GTB has rarely stopped touring, amassing a truly international fan base, with tours and festival appearances in the UK, USA, Canada, Dubai, Ireland, Austria, Belgium, the Czech Republic, Denmark, France, Germany, Hungary, Ireland, Italy, Lithuania, Luxembourg, Macedonia, Norway, Poland, Portugal, Serbia, Slovakia, Slovenia, Spain, Sweden, Switzerland, The Netherlands, Turkey, and Ukraine
six albums later...
All Is Yes (Cake/Candid, 2008), BBC Jazz Award Winner for Best Album
"at last, a noisy, thrashy post-jazz combo that sounds like a proper band" The Independent
"mixes scorching rock with Ornette Coleman-like sax and much more besides to thrilling effect" The Guardian
https://www.gettheblessing.com/
www.youtube.com/watch?v=32W8IXl22t0 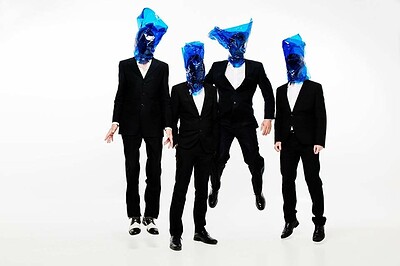