"At once a celestial incandescence and a tragic thrashing beast: Sarahsson’s mercurial sound exists in a rotting orchid garden where strange, beautiful moulds thrive. Their operatic performances birth synaesthetic chaos, queering their voice and live instruments between the lines of tacky pop and harsh noise – think the Cinderella soundtrack played on a bone saw.

With Bristol as their dwelling, Sarahsson has invaginated themselves on the stages of The Bristol Germ with Lynks Afrikka, Planet Fun with Hannah Diamond, Snog with Gfoty and Chema Diaz and over the border at Parkingstone with Linn da Quebrada. They have released music with the ethereal High Heal label and continue to work with transgressive fashion brand Neith Nyer for their Paris Fashion Week runway soundtrack." - EMIKA
________________________________

"RRS fondly describes himself as the cardboard simulacrum of the artist formerly alive and known as Prince. He’s an awful lot funnier than the diminutive Minnesotan ever was though. Presenting as an archly-awkward and un-self-aware performer, Robert’s shows, like the best comedy and the best improvised music, implode and fall apart in all the right ways.

Roughly sketched and heavily improvised, including unwittingly muffled backing tapes awash with presets, his shows and recordings contain searing honesty and openness, classic English farcicality and a surprisingly strong rapport with his audience that, despite the numerous calamities, always leaves him fully in control. It could also be that a subliminal implication of vulnerability and sensitivity further endears the audience and keeps them very much on Robert’s side despite the many, often self-inflicted, performative pratfalls."
Tusk Festival
________________________________

Social distancing rules apply: table service and masks to be worn at all times, unless seated. 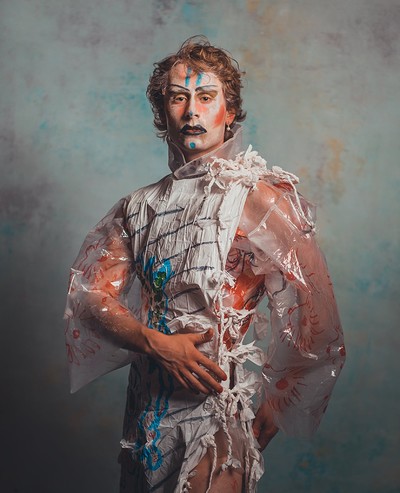